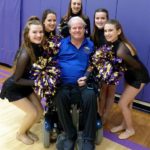 BARNEVELD — Jeremy Amble always wanted to be a dairy farmer, but after a car accident on May 25, 1991, his goals quickly changed.

Amble suffered a spinal cord injury in that accident, leaving him paralyzed from the neck down except for limited use of his left arm. He has spent most of the ensuing 26½ years in a wheelchair.

But that hasn’t stopped Amble from making the most of his life. Two years after the accident, he married the woman who nursed him back to health in the hospital after his accident, and together they are the parents of two sets of twins. Despite his limited mobility, Jeremy publishes the weekly Barneveld Shopper from his home in rural Iowa County.

More recently he has taken on a new challenge. Late this summer he was selected as coach of the Barneveld High School dance team, a six-member team that includes his twin daughters and a foreign exchange student from Italy who lives with the Ambles.

When last year’s dance team coach resigned, Amble thought he would apply for the job to see if he could put his dance knowledge to good use. After all, he had been watching his twins, Hallie and Jossy, 17, dance in the Betty Hayes School of Dance since they were 3.

“I thought, why not?” Amble said of his decision to apply for the job. “I put my application in, I was the last one of three or four to be interviewed, and they offered me the job at the table. It’s nice they would put their trust in me. Obviously, it’s different having a 40-something-year-old dad in a wheelchair being a dance team coach.”

Tami Bowser, Barneveld School Board president, said the position of dance team coach has been a difficult one to keep filled. Amble is the team’s fourth coach in five years.

“I think what Jeremy brings to the position is a passion and dedication to see the program succeed,” Bowser said. “The fact that he is willing to take it on is a testament to that passion and provides an outstanding role model for the girls involved. This, along with him being from the community and having daughters involved, made him a great choice for the position.”

Amble said he obviously can’t demonstrate the dance moves, so he has to convey what’s in his mind and tell the girls what he sees when they’re on the floor.

“The girls are handling the choreography — they know what they really want,” he said. “I make my suggestions from watching, things I like, things I don’t like. They’ve all been pretty responsive to that and have been good about listening.

“I’ve seen a lot of dance recitals. After a while you know what looks good.”

Amble said before he applied for the job, he asked his daughters what they thought of the idea. They gave it their approval.

“If they didn’t want Dad to be there I wouldn’t have applied,” he said.

Hallie and Jossy admitted their senior season has been different than their first four on the dance team. Both girls joined the high school team as eighth-graders.

“We get a lot of say in what we do, which is really nice, to be able to choreograph our own thing,” Hallie said.

“It’s nice to have all our family together,” Jossy said. “Everybody on the team works really well together.’

Catarina Torresi, a foreign exchange student from Italy who is spending a year in the U.S., is staying with the Amble family. She is also on the dance team.

“I like my house father and house sisters being with me,” she said. “It is such a good experience.”

Amble’s twins and Catarina are joined on the team by seniors Claire Harned and Jenna Peterson and freshman Tamra Ihm. They are one of the smallest teams in the area with only six members, but have still set their sights high.

Jeremy said it’s the team’s goal to do well at the regional dance competition on Jan. 27 in Watertown and qualify for the state finals a week later in La Crosse.

“Ours is probably going to be the smallest team coming into it,” Jossy said. “But from our past years of experience, we know a lot of different steps. We go online, watch other teams and see if we like something.”

The song the team picked out for the regional dance competition is called “Let’s Get Ridiculous,” and is one of the songs proposed by Jeremy.

“It has a quick, fast rhythm and a good beat to it,” Amble said. “It has some fun parts in there. They all agreed with it.”

The team had its first public performance of the year at halftime of a home basketball game earlier this week.

Amble said the response from people he has told about his coaching gig has been positive.

“People say, ‘Good for you,’ ” he said. “Some have said, ‘You’re a braver man than me to deal with teenage girls.’ But I live with three of them that are on the dance team.”

Amble said he doesn’t want the fact that he’s coaching the team to be the focus of the dance team season.

“It’s all about the girls,” he said. “I want them to do well for themselves, to just have a successful season and have fun.

“I don’t feel I’m doing anything to prove myself. I’m filling a void and hopefully we can get them to where they want to be.”

Amble said he has watched plenty of video of other dance teams and sees a common denominator with those that are successful.

“I told the girls, ‘It’s only two minutes, but when these teams come off the floor, they’re breathing hard, they are working hard,’ ” he said. “This is what the girls have to do. They have to feel the burn. That’s what it’s going to take. They understand that.”

Amble said it will undoubtedly be difficult for his small team to qualify for the state competition, because sometimes it’s easier to hide a deficiency when there are a larger number of dancers.

“If one girl is off, you notice it more in a group of six than with 20 or 30 kids,” he said. “We have to be precise and sharp and all doing the same thing.”

Amble grew up on his parents’ dairy farm between Barneveld and Ridgeway and dreamed of someday taking over the farm someday.

His father, Richard, still milks about 120 cows on the farm just down the road from Jeremy and Renee’s home.

“My whole ambition was to run the dairy farm, but things took a turn in a different direction,” he said. “Your life sometimes changes from what you were thinking you were going to be doing, to something totally opposite.”

Jeremy and his wife, Renee, who have been married since August of 1993, also have a younger set of twins — Brayden and Tristyn, 12.

Tristyn is in seventh grade and wants to be on the dance team next year, but Jeremy said she and her classmates will have to recruit some more girls if they want the team to continue, since five of this year’s dance team members are seniors.

“Tristyn hopes I’m going to continue to coach next year,” Amble said. “We have one freshman on this year’s team and the seventh-graders who want to compete as eighth-graders next year, but we’ll have to see.

“If I do another year, I would ask (Hallie or Jossy) to come and help with the choreography, if they are going to college close enough. It’s a lot to throw on a young team if they really haven’t done it before.”