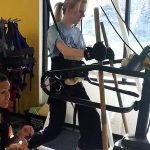 A North Carolina woman who got married last summer after a poolside accident left her paralyzed isn’t walking yet, but she hasn’t given up on learning to move on her own again.

Rachelle Friedman Chapman is stronger after training for almost three weeks in October at Project Walk, a spinal cord injury recovery center in Carlsbad, Calif. And the 26-year-old from Knightdale, near Raleigh, hopes to return for more training that could help her walk for the first time since the accident just weeks before her original wedding date.

“You see people standing up out of their wheelchair, people who are relearning how to walk,” Chapman said in a recent phone interview.

It was on May 23, 2010, that Chapman was pushed into a pool by a friend at her bachelorette party in Virginia Beach, Va. She fell into the shallow end and awkwardly hit the cement bottom. The injury to her vertebra left her with no feeling from the chest down and feeling on the inside of her arms but not the outside. Her wedding had been scheduled for a few weeks after the party, but she and her fiance postponed it by more than a year.

She has never revealed the name of the friend, who was a bridesmaid when the wedding was finally held in July 2011. The cruel timing of her injury and her enduring positivity landed her story in newspapers, websites and television reports around the world.

Chapman got one round of rehabilitation therapy after her accident and tried to exercise on her own. Now she works out on a table that her husband, Chris, and his father built for her and does weight-bearing exercises on a home gym.

Her balance is better because her core is stronger, as are her arms.

When Chapman arrived at Project Walk, she was weak, says Kimberly Davis, an instructor there. Her blood pressure was low because her muscles had atrophied and she didn’t have the muscle contractions necessary to move the blood, Davis says.

“Mornings would be difficult for her,” Davis says. “We wouldn’t even be able to get her into a seated position without her passing out.”

She also was suffering from bone loss because she’s not standing or bearing weight. By the end of her treatment, Chapman was able to move for 30 minutes on a machine similar to an elliptical trainer that takes clients through the walking process while supporting their legs and body with a harness.

She also was able to get upright in a frame that uses hydraulics to move clients to a standing position.

“I was pretty impressed with her progress,” Davis says. “She didn’t leave here walking, but she increased her strength tremendously.”

While she describes Chapman’s condition as severe, Davis says it’s still possible she will walk again. “With this injury, it’s unpredictable,” she says.

Chapman, whose California rehab was funded by an organization called Walking With Anthony, hopes to return in 2012. “I want to go back more than anything,” she says.

Davis wants her to return as well. “If I could have her back in here tomorrow, I would,” she says. “She needs to be back in here as soon as possible. There’s really no duplication of the program.”

Meanwhile, Chapman is taking care of other business. As promised, the Beatles fan got a tattoo of the peace sign drawn on the back of her neck, at the center, marking her injury. Underneath is inked, “Let It Be.”

It was, she said, the most painful thing she’s ever experienced — the fall in the pool didn’t hurt.

She also learning to drive again and thinking of trying to find a job or getting a master’s degree in a subject such as school counseling. And she’s started writing a book.

She and her husband are considering having a child, but she has to get off the blood pressure and pain medications to do that.

“It’s not going to be a fun pregnancy,” she said. “I’ll probably be dizzy and in pain all the time. It will be nine months of sacrifice. … But we would love to have our own child.”

U of L researcher reverses spinal cord damage in rats

Protein shown to play a key role in normal development of...