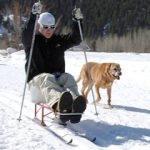 On Mother’s Day 2005, 24-year-old Joey Lowe of Boise, Idaho was in Iraq, buttoned up in a tank. Lowe, a U.S. Marine corporal, was the gunner on the crew of an M1-A1 Abrams in the Battle of Al Qaim, code-named Operation Matador.

On the first day of Operation Matador, Corporal Lowe’s life changed forever. Fighting to keep insurgents from crossing a bridge spanning the Euphrates River on the Syrian border, his tank rolled over a 600-pound bomb buried in the soil. The charge was remotely detonated.

The blast lifted the 70-ton tank several feet off the ground and punched a deep concavity into the armor underneath. Lowe was driven into the roof of the crew cabin. The impact snapped his spine. Several other Marines in the tank lost various limbs. Miraculously, they all survived.

Lowe was left with a spinal injury known as a “T-3 complete.” His spinal cord was severed at the third thoracic vertebrae. He was paralyzed from the nipples down. Several surgeries and a long, painful rehabilitation lied ahead. He hasn’t let that stop him from living a full life.

Lowe told me his story while we were skiing together. I had the honor of spending a day with the Marine at 49 Degrees North. He lives in Coeur d’Alene now, and leads an active lifestyle that would put most able-bodied individuals to shame.

Less than a year after his spine was shattered, Lowe learned to ski. Sun Valley Adaptive Sports called him and invited him to join their program. He was apprehensive at first.

“At the time I was independent, but I was still recovering,” he said. “I was coming off a heavy antibiotic regimen and trying to get off painkillers. My body and my immune system were still weak. I had to get stronger.”

Lowe took Sun Valley up on their offer and knew he made the right decision.

“It opened my eyes to the adaptive sport world and what I was capable of pushing myself to do,” he said. “I was really an active person before I was injured. Learning to ski felt so good, it gave me the confidence to be active again.”

Able-bodied people take their core for granted. It’s easy to forget how critical core muscles are for everything from getting out of a car to turning on skis. The learning curve on a sit ski for someone with a T-3 complete is steep. Lowe worked hard for two seasons mastering it. By the third season, Sun Valley relied on him to show other veterans what is possible.

After spending a day with Lowe, I was inspired by how much is possible with a powerful mind. Strapped into a chair over a pair of skis mounted on a unique suspension system made by Tessier, a French company, he ripped arcs in the snow.

Lowe trains year-round to stay in shape for the sit ski, a demanding setup. He’s ridden the Seattle to Portland Bicycle Classic and represented the Marine Corps in handcycling and swimming at the 2010 Warrior Games. He hopes to make the team again this year.

Lowe has become a popular public speaker at high schools, with veterans groups and at Marine Corps events. He coaches at summer youth camps and returns to Sun Valley to help veterans master the sit ski.

“I take every opportunity to share my story,” he said. “Life is about overcoming adversity and the challenge of picking yourself up after things get tough. If I’m able to reach two kids for the rest of my life it’ll be worth it to me.”

Facebook
Twitter
Email
Mix
Digg
Previous articleDoes she have a disability or just an injured leg?
Next articleSmall change makes a big difference