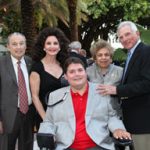 The gift will not only name, but fund the human clinical trials initiative at The Miami Project. Research that is part of this initiative is in the translational phase and is being readied for clinic by undergoing the rigorous United States Food and Drug Administration (FDA) approval process. Currently, Miami Project researchers are in the process of seeking FDA approval for the first ever Phase 1clinical trial involving Schwann cell transplantation. These funds will go a long way in moving this important research forward and to laying an important foundation for future clinical trials.

“I have supported The Miami Project and The Buoniconti Fund for many years and it gives me great pride and pleasure to be a part of this most wonderful cause. I know how close they are to finding a cure for paralysis and I believe that when you have talent and support, miracles can happen. It gives me great satisfaction to name the Christine E. Lynn Human Clinical Trials Initiative at The Miami Project to Cure Paralysis,” said Mrs. Lynn.

Helping those less fortunate is nothing new to Mrs. Lynn. Her name has long been synonymous with outstanding generosity and humanity in the world of philanthropy. She has dedicated her entire life to improving the health, education, and welfare of the people of south Florida and around the world.

“Christine has spent a lifetime helping others and giving to others in need. She personifies the philanthropic spirit and has been a true friend to the Buonicontis, The Miami Project, and the entire spinal cord injured community, and for that we are eternally grateful,” said Miami Project Founder Nick Buoniconti.

Christine Lynn has always cared for people. She has been, and remains an active chairperson and volunteer for many charitable organizations and events. Her good works are legendary and reflect her belief in and passion for nursing, which is her background, as she understands the importance of quality healthcare. Through her good works, she is leaving a legacy that will benefit humanity for decades and decades to come.

“Mrs. Lynn is like an angel that was sent to The Miami Project. She has stood by our side for so many years, and continues to help us take the critical steps needed to help us change the lives for millions around the world suffering from spinal cord injuries,” said Miami Project President Marc Buoniconti.

Christine Lynn has been an exceptional and long-time supporter of The Miami Project and serves as a Buoniconti Fund board member. In 1999, Christine and her late husband Eugene granted funding to build the lobby at the Lois Pope LIFE Center, which houses The Miami Project. In January 2003, Mrs. Lynn, endowed The Christine E. Lynn Distinguished Chair with a $2.5 million gift to fund spinal cord regeneration research in Dr. Mary Bartlett Bunge’s laboratory and has had a profound impact and significantly advanced progress in regeneration research at The Miami Project. Christine also gave an additional two million dollars to start the Human Clinical Trials Initiative, thus giving way to the most cutting-edge research project in The Miami Project’s history. Over the years she has contributed more than $15 million, making her the largest individual donor in the history of The Miami Project.

A native of Norway, but born in Denmark, Christine Lynn was trained as a Registered and Surgical Nurse in Oslo, Norway, starting her on a path to promote excellence in medical research and care. A long-time resident of Boca Raton, in December 2008, the Boca Raton Magazine referred to Christine Lynn as its “Hometown Hero” for her outstanding generosity and love for her Community. The Lynn name appears on buildings as well as entire institutions. Lynn University which was formerly The College of Boca Raton was renamed Lynn University in 1991 in recognition of the Lynns’ long years of support. She currently serves as Chairman of the Board of the Lynn Insurance Group and Chairman of the Lynn University Board of Trustees. Because of her strong background in nursing, The Christine E. Lynn College of Nursing was established at Florida Atlantic University. The Christine E. Lynn Center for Caring and The E.M. Lynn Foundation Congenital Heart Disease Research Program are both also based at Florida Atlantic University.

Mrs. Lynn also has been a major donor to Stetson University, Hospice By The Sea, the Center for Group Counseling, YMCA, the Florence Fuller Child Development Center, The ARC, and The Junior League.

The Quest for a Cure: Paving the Way in Paraplegic Research