David Weir: ‘I have never seen myself as disabled’ 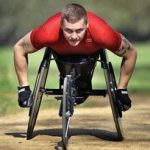 He won last week’s Marathon for a fifth time; now London 2012 is firmly in his sights

We have all seen those Q and A interviews where a celebrity is asked who he or she would invite to a dinner party. It is a game we can all play. Most of my guests would be blindingly obvious – Muhammad Ali, Nelson Mandela, Seb Coe, Angelina Jolie… and I would also be more than happy to break bread with one of Britain’s greatest current sportsmen, though I doubt any of the other table mates apart from Baron Coe of Ranmore would have heard of him. Indeed, not that many people have.

David Weir is the sort of modest, articulate bloke you could chat to down at the pub and never know he is his sport’s principal achiever, a world and Paralympic champion whose cabinet is crammed with trophies and medals.

In any other sphere of sport he would be an icon. But the wheelchair wizard says he is happy to be exactly who he is, “Dave from Wallington”. “I might have won a few things but I’ve still got the same mates I’ve had from back on the council estate,” he says.

I met Weir after his regular training spin in Richmond Park, where he was preparing for last Sunday’s London Marathon, which he won for the fifth time.

We quickly found some common ground. It turns out he’s a boxing buff. In different circumstances he would love to have been a boxer, like two of his brothers, one an ABA finalist and another a pro for a while. “My good friend Ricky Bullen has just turned pro. I love the fight game. My heroes are Roberto Duran, Joe Calzaghe and Ricky Hatton.”

Boxer he could never be, having been born almost 32 years ago with spinal cord transection, which left him without the use of his legs. But fighter he unquestionably is. Tattooed on his chest is a Japanese symbol meaning “To win”. “That pretty well sums me up as an athlete,” he says.

“My parents brought me up to be independent,” he said. “I was David Weir, not poor David in a wheelchair. My mates don’t see the wheelchair, they just see me. I have never seen myself as disabled. I have always been treated as normal.” That normality extends to family life. He has an eight-year-old daughter from a previous relationship and is expecting a baby with his new partner this summer.

Last year he won the New York Marathon and in February he took triple gold (in the T54 800m, 1500m and 5,000m) in the World Championships in Christchurch.

Weir has the shoulders of a weightlifter from the amount of weight training he does, and they are a vital part of the human machinery which, allied to his wheels – newly custom-built at a cost of £5,000 – have made him the Lewis Hamilton of his sport.

“Actually our chairs are like Formula One cars; they’re the absolute cutting edge of technology, and everything has to be just perfect,” he says. “If it wasn’t for wheelchair racing [he has been a full-time athlete for 10 years] I don’t know what I would have done. I’d probably have been a bum.”

The Paralympic scene is somewhat different now to when he first started spinning the wheels. “There are more kids on the streets in wheelchairs and the public are used to seeing them. Also I think people have become fascinated by the Paralympics from what they’ve seen on TV. They realise they can be as exciting as able-bodied sport.

“We are not quite there yet in terms of being recognised like the able-bodied athletes but I am hopeful that it will come. I do get recognised now and then, which is nice, but I just see myself as a wheelchair athlete doing his best for his country.”

Yet it hasn’t all been free-wheeling for the Arsenal-supporting south Londoner. He admits falling out of love with the sport some years back, when his life could have turned sour. “It was after Atlanta [1996 Olympics]. I was about 17 and missed doing the things that other teenagers were doing, like going down to the pub for a drink with your mates. I was fed up with the training, with the discipline of it all, stuck in the same routine. Also there was a lot of politics in the sport at the time and I thought: ‘I don’t need this any more, I need to live a little.’

“Then when I watched the Sydney Paralympics on TV, with Tanni winning all those medals, I just sat there crying. It broke my heart. I had to turn it off. I said to myself: ‘I’ve got to do this.’ I had no qualifications, nothing. Wheelchair racing was the only thing I was any good at.” His wheels of fortune changed when he was reunited with his present coach, Jenny Archer, who had been a fitness trainer with Vinnie Jones and the Crazy Gang at Wimbledon FC and knew how to knock difficult men into shape.

Heinz Frei, the veteran Swiss star of both summer and winter Paralympics, in whose slipstream he stayed for the final 10 kilometres before outsprinting him down The Mall, is Weir’s personal icon, one who would head his own dinner party guest list, alongside Roberto Duran, Gazza and Margaret Thatcher (now that would be an interesting meeting of minds).

Weir’s own mind is now firmly focused on 2012. “My training is specifically geared towards that. I think about it all the time. London is always at the back of my mind. To win the Paralympic marathon down The Mall would be the pinnacle of my career. What better way to bow out?”

Message from an icon: Heinz Frei

David and I have raced together several times both in Marathons and on the track. I have known him since he was a young athlete and watched him progress with admiration.

We are friends as well as rivals but nowadays in the shorter distances I don’t have a chance against him. He is too quick, too strong, and he was certainly too fast for me last Sunday.

What I like about him is that he is such a gentleman athlete. With him it is always fair play. I have never heard a bad word about him. He seems to have respect for everyone.

We are all part of a big family in wheelchair racing and I always look forward to having a beer with him after the race. He is such good company.

I am sure he is a great prospect for London 2012. Like the other British athletes he will be especially motivated for a home Games.

The success he had in the World Championships in Christchurch earlier this year will have put him on the right path, particularly mentally.

I know he was a little disappointed with some of his performances last year and with his shoulder injury, but he seems to have sorted himself out and is very focused.

His concentration and his physical strength are his greatest assets. In my head I would like to race against him in the Olympics but I have to be realistic.

I am 53 now and it is getting harder. I have been in the sport at the top level for 30 years now, and I compete in other sports too.

In fact I look back on winning two gold medals in hand-cycling in Beijing as one of my greatest achievements.

Compared to me, David is a young man and although he talks about possibly retiring next year, I think this would be too soon. He could go on as I have.

I hope he stays in the sport because he has a lot to offer to young athletes. For what he has achieved already, Britain should be proud of him.

Heinz Frei is recognised as the greatest ever wheelchair athlete and all-round Paralympian. The Swiss, 53, is a three-times winner of the London Marathon and has won 14 gold medals at the summer and winter Games in wheelchair racing, hand-cycling, sit-skiing and biathlon