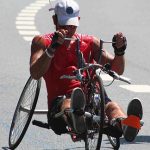 “Charitable” isn’t the first word which usually springs to mind when you think of a Goldman Sachs banker.

But Carolina Gonzalez-Bunster, who left the investment bank at the height of the financial crisis, is now a rising star in the not-for-profit world. Her charity, the Walkabout Foundation, has won the backing of both former and fantasy Presidents (Bill Clinton and Martin Sheen) and she has walked hundreds of miles to fund its work – all while living off her savings.

Walkabout, which she founded with her elder brother Luis in August 2009, has two goals: to distribute wheelchairs in the developing world and to help find a cure for paralysis. The 28-year-old knows the pain of spinal cord injuries only too well: Luis was left paralysed from the chest down after a car crash in 1994. He had finished school just two weeks earlier.

“Sometimes I think: ‘Why him? Why us?'” Carolina admits. “Everything changed overnight. People don’t realise that when you have a spinal cord injury, you lose control of your bladder, your bowels, your sexual functions. You have pressure sores, circulation problems, respiratory problems.

“My brother hasn’t stood up in 16 years – humans aren’t designed to be sitting down the whole time.”

She says 35-year-old Luis has “good and bad” days: “Sometimes he doesn’t want to deal with anyone but at other times he is unstoppable, on top of the world.” Carolina oozes pride when she tells how, when Walkabout won the Christopher Reeve Spirit of Courage Award last year, her brother’s speech earned him a standing ovation.

She is also optimistic that a cure can be found for paralysis: “The research scientists I meet say it is no longer if but when.” Last month, it emerged that a paraplegic patient, Rob Summers, had taken his first steps after a pioneering treatment, which involves electrical stimulation of the spinal cord.

Carolina, who moved to London from Connecticut six years ago, worked for Goldman for 18 months – first here and then in Dubai. After the collapse of Lehman Brothers, she flew home “to regain her senses”. There, she discovered that her brother – who was training to do the New York marathon on a hand-cycle – was swimming in the family’s outdoor pool when a state-of-the-art YMCA pool had opened only two minutes away.

“It was freezing and I was like, Luis: why are you swimming outside when there is this amazing indoor facility?” says Carolina. The reason? The pool was wheelchair accessible but users first had to climb several flights of stairs to reach it.

Anger at this turned Carolina from analyst to activist. She involved the local press, organised a community campaign and gained thousands of signatures to her petition, winning the battle a year later.

“I realised that if I could do this, I could do something on a much grander, global scale,” she says. “I had a burning desire to do something for my brother and for the millions of people like him who can’t walk. It was the impetus, along with the crisis, which made me take stock of my situation. I realised that my heart wasn’t in Goldman.”

When she left the bank, everyone told her she was mad: “They all said: why are you leaving a great job when people are losing their jobs? And I just kept thinking that I want to do something that I am passionate about, that I get out of bed in the morning for, and I am excited.”

She and Luis, who runs Walkabout US from Connecticut, launched the foundation with a sponsored 31-day, 900km walk across Spain. “Luis became the first person to cross the country using only his arms. It attracted a lot of publicity.”

Another gruelling trek followed a year later in Italy – a marathon every day for a week. But Carolina is encouraging supporters to start with a more tame endeavour – a mere 15km Walkabout. The foundation is holding its first event in Hyde Park later this month, with others to follow around the globe. “It’s meant to be a really fun, family affair – not a race – bringing wheelchair riders and walkers together,” she says.

It is open to all but her dream is for each participant to raise £200 – the cost of a wheelchair. Sponsors include fashion website Net-a-Porter, which is donating T-shirts, and Nails Inc, which has given nail polish for the goody bags. Carolina hopes it will become an annual event.

Her impressive contacts book has helped the foundation spread its message. She previously worked for the Clinton Foundation and persuaded the former President to take her with him when he visited Haiti immediately after last January’s earthquake.

Showing me photos of the aftermath, she says the desperate need for wheelchairs was clear: “Thousands of people had spinal cord injuries after the earthquake and there were so many amputees. As there were no wheelchairs, people used wheelbarrows or supermarket trolleys to move around.”

Returning to London, she posted a video of Bill Clinton talking about Walkabout’s work. It attracted 500,000 viewers within two weeks. Among them was Ralf Hotchkiss, who had designed a lightweight wheelchair for the developing world which cost just £200. The Walkabout Foundation ordered 750 and shipped them to Haiti. “They help someone to re-integrate into society, be active again,” says Carolina. “So many other organisations that donate wheelchairs donate that hospital chair – people need something more dynamic.”

Carolina has made six more trips to Haiti since the quake and is just back from Rwanda, where people were so desperate for wheelchairs that they dragged themselves on the dirt ground for kilometre after kilometre to see her. Next on her list to visit are Chile, Sudan, Pakistan and Uganda.

“If you give someone a wheelchair, you give them freedom and independence,” says Carolina. “One of the women we helped in Rwanda emailed and said, ‘Maybe the reason Luis had his accident was so you could change the lives of the 300 people you’ve just helped here’. That made sense to me. If you can change a life, it gives everything meaning.”