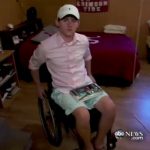 “We want to cure paralysis,” he said. “We want to stop spinal cord injury. How incredible would that be?”

Leslie’s mission has begun with T.J. Atchinson, the first step in research that he believes could lead to many steps for those who were told they would never walk again. Atchinson, 21, was the first human with a spinal cord injury to undergo embryonic stem cell therapy.

The athletic college student’s life took a hard turn in September when he was home from the University of Alabama visiting his family in Chatom and lost control of his car. Even before he was cut loose from the vehicle, he knew something was wrong.

“I realized I couldn’t feel from about here down,” nursing student Atchinson said, pointing to his waist. “When I got to the hospital, they said I would never walk again.”

The accident took place on the birthday of Christopher Reeves, the actor who had fought hard for embryonic stem-cell therapy but never lived to receive it. Atchinson was still accepting the news about his situation when doctors told him he’d be a great candidate for the therapy.

Stem cells are the building blocks of life, and they’ve been used in the laboratory to repair the broken spinal cords of small animals, who walked again. Atchinson agreed to become test case No. 1.

Doctors opened his wound, while researchers used a remote control to guide the needle. They injected his spinal cord with a small dose of 2 million cells that, they hope, will transform into new nerve cells, attach to muscles and refire Atchinson’s central nervous system.

Although Atchinson’s role was only to prove the procedure is safe, he believes it’s already working. “I can feel that,” Atchinson said, pulling the hair on his legs.

After six months of the therapy, he said, he’s able to sense weight when he places heavy items on his lap. It’s barely there, Atchinson said, but he can sense something.

Rubbing his leg, Atchinson said, “I can feel that, there’s something there.”

His doctors are cautiously optimistic.

“It’s very hard to measure sensation,” Dr. Leslie said. “But if he tells me he couldn’t feel something before, and he can now, I got to believe him. And I want this for him more than you know.”

His mother, Anita McDonald, wants this, too, saying that people who oppose the therapy on religious grounds are unreasonable.

“It doesn’t matter how long they’ve been in a chair, they all want to walk again,” McDonald said. “I just know a lot of people are against it, but until they’ve been put in the position, I don’t think they should judge anybody.”

Doctors will continue to measure Atchinson’s strength and test his nerves and muscles. He returns to school in the fall, moving on with his life but still holding out hope that his injury is healing.