Piercing a Tongue, in the Name of Mobility 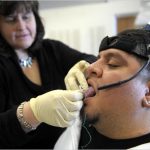 CHICAGO — Martin Mireles says his mother was not happy with his tongue piercing: It didn’t fit his image as a former church youth leader.

But as Mr. Mireles told her, it was for research. Paralyzed from a spinal cord injury since he was shot in the neck almost two decades ago, he was recently fitted with a magnetic stud that allows him to steer his wheelchair with his tongue.

Now he is helping researchers at the Northwestern University School of Medicine here in a clinical trial of the technology, being financed with almost $1 million in federal stimulus funds.

Mr. Mireles, 37, tested the equipment one recent afternoon by guiding a wheelchair through an obstacle course lined with trash cans. Mouth closed, he shifted the magnet to travel forward and backward, left and right.

The study was one of about 200 projects selected from more than 20,000 applicants.

“There was a ‘wow’ factor here,” said Naomi Kleitman, a program director at the National Institutes of Health and an expert on spinal cord injury research. “This is kind of a cool idea. The question is: Will it work well enough not to just be cool, but to be practical too?”

A quarter-million Americans have severe spinal cord injuries, and experts estimate that there are about 10,000 new injuries each year. Millions more have some form of paralysis from an array of conditions, including stroke, multiple sclerosis and cerebral palsy.

Wheelchair users do have several options now, including the “sip and puff” technology, used by the actor Christopher Reeve before his death in 2004, in which the chair is steered by breathing through a straw.

But Maysam Ghovanloo, assistant professor of electrical and computer engineering at the Georgia Institute of Technology, wanted to create a technology that would be more aesthetically pleasing — without a straw obscuring the face — and more intuitive for users, with better control and greater flexibility.

After working on the tongue drive system for about five years, Dr. Ghovanloo is now conducting the clinical trials with Northwestern, the Rehabilitation Institute of Chicago and the Shepherd Center in Atlanta.

To operate the system, the user wears a headset with sensors that pick up magnetic signals from the tongue ring. Moving the tongue to the mouth’s upper left corner, for instance, moves the wheelchair forward. (The researchers hope that in the future, touching each tooth could signal a different command, from turning on the television to answering the phone to opening a door.)

Researchers decided to use the tongue because they wanted to take advantage of some of the functions a severely disabled person still had. The tongue does not tire easily, they said, and it is not usually affected by a spinal cord injury because it is directly connected to the brain through a cranial nerve.

At first they just glued the magnet to the user’s tongue, but it often fell off after a few hours. The idea for the piercing came from Dr. Anne Laumann, an associate professor of dermatology at Northwestern who had studied body art.

Ann Carias, a nondisabled volunteer who had her tongue pierced for the study, said it hurt for a few days but healed faster than she expected. When she tested the wheelchair, she said it became easier to steer the more she used it.

Ms. Carias, a 30-year-old Ph.D. student who has several other piercings and large tattoos, said she sometimes felt judged because of her piercings. She thinks the technology will give disabled people more freedom — and could have a side benefit for others as well.

“I think it’s great that something taboo can be used for therapeutic reasons,” she said.