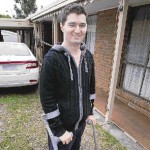 MORNINGTON’S Irwin Vale was told by doctors he would live the rest of his life as a quadriplegic, unable to move his body as a result of a scooter accident three years ago.

But he has proved them wrong. Thanks to his parents’ support, hard work and an alternative exercise therapy, Mr Vale is walking, with the assistance of crutches, and wants to help others do the same.

Mr Vale has held a commercial pilot’s licence since age 16 and, at age 19 moved to Fiji to work as an instructor.

Three months into his contract, Mr Vale was on his way to work on his scooter when he was involved in an incident with an unmarked police car which failed to give way to him.

“I wasn’t meant to be working but I went in just to tidy up a few things and I was planning to go away for a couple of days.”

Mr Vale was rushed to hospital with a spinal injury in his neck and a smashed disc. His parents Amela and Armin arrived at the Fijian hospital within 24 hours and began to work on getting their son home to Australia.

“I was lucky to survive. Usually with my injury the person is not able to breathe,” Mr Vale said. “If I wasn’t breathing then I don’t think I would have survived, they just wouldn’t have been able to manage that sort of condition.

“I’ve known of people who have died in the same hospital of a broken leg, from infection.”

Mr Vale was transferred to the intensive care unit of the Austin Hospital in Heidelberg where he underwent surgery on his spine. “They told my family I’d never move anything below my neck again, let alone walk.”

Mr Vale stopped taking his anti-spasmodic drugs and secretly worked on teaching his body how to move while he was lying in bed.

“Instead of accepting it and trying to find ways to adapt to life with a disability, I found ways to recover and get better,” he said.

While he was researching alternative therapies, Mr Vale discovered Project Walk, a program based in America. “It’s like boot camp for people with spinal cord injuries. It gave me hope that the intensive exercise was the right thing.”

Mr Vale said under a traditional rehabilitation system, a physiotherapist assisted spinal cord injury patients to retrain only the parts of the body which were still active, to get them by in a wheelchair.

“At Project Walk they lift you out of the chair – you don’t see it for the whole session.”

He is working with two young people who have had spinal injuries to open Project Walk Melbourne, at a cost of about $600,000.

While the group has received support , it has not received government funding as the therapy is considered a medical alternative.

A black tie gala ball at The Centre Ivanhoe on July 23 hopes to raise money to bring Project Walk to Melbourne.

Unsupervised Trampoline Use Contributes to Jump in Children’s Injuries