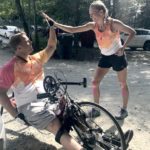 This couple is in it for the long haul.

For Rob Summers, 31, and Julie Grauert, 34, the New York City Marathon was an opportunity to fund-raise for a cause near and dear to their hearts: Finding a cure for the six million Americans living with paralysis.

But as the first-time marathoners worked to get closer to a cure, they also got closer to each other.

Summers was a 20-year-old pitcher at Oregon State with dreams of playing in the Major Leagues when he was struck by a hit-and-run driver in July 2006.

“I heard screeching tires coming around the corner, and when I looked over my shoulder I saw the headlights coming right at me,” he said.

When he jumped out of the way and rolled over the hood of the car, he suffered whiplash so severe that “it tore all the muscles and ligaments and tendons in my upper back,” he said.

He sustained a spinal cord injury that left him paralyzed. The driver was never found.

An experimental procedure three years later transformed Summers’ day-to-day life in ways he never imagined possible. He became the first person ever to be implanted with an epidural stimulator, a device that imitates natural brain nerve signals.

“It’s essentially a small computer implanted in my lower back,” he said. “I can now think of moving something and my body moves it.”

Moreover, the stimulator brought back many physical capabilities, including his ability to sweat, control his bladder, and have sex.

He met Grauert, a PIX11 reporter in New York, in April 2014 when he appeared on the morning news show to discuss the Christopher and Dana Reeve Foundation, for which he had started raising money.

He asked her out, and the pair quickly realized they were both from Portland, Ore., with childhood homes seven miles apart.

The couple now lives in Boston, but New York – the city where they met and fell in love – has a special place in their hearts.

Sunday’s race was the first marathon for both of them. And for Summers, who handcycled, it was the first competitive athletic event he’d done since before he was paralyzed.

“It felt like the right place and right time to take that next risk,” he said.

The couple raised more than $27,000 for the Reeve Foundation, named for the late “Superman” actor paralyzed in a horse-riding accident.

“When we’ve been training, it’s just two people training who fell in love and get to do this together,” Grauert said a few days before the long-distance run.

“But it doesn’t have anything to do with ability. It’s an equalizer. And it’s been so much fun.”

“Any time a couple can do something together, you share in both the adversities you face as well as the triumphs,” Summers said.

Their months-long training regimen, he added, “has brought us closer in many ways.”

“As she has seen and gotten to understand everything that I go through on a daily basis and help me through all those things, it’s also brought us closer,” he said.

“The marathon is a good analogy for paralysis. Each mile, each hill, is a challenge that we face together,” he added. “And each journey along the way it has brought us closer to finding the cure to paralysis.”

Steps to a Cure