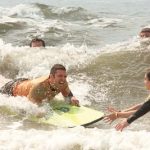 WILDWOOD CREST — A spinal cord injury doesn’t mean that you have to give up the things that make life worth living.

Even surfing is possible. And on June 18, a group of young people affected by spinal cord injuries took to adaptive surf boards and caught some waves off Rambler Road beach.

The event was coordinated with the help of Chad de Satnick, a local lifeguard who broke his neck surfing in September 2001 off Poverty Beach in Cape May. De Satnick had to undergo spinal surgery and years of therapy following that injury, but he was able to regain full use of his limbs, although he lost a little of his flexibility.

Since then, he has been a proponent of raising awareness about the rising number of spinal injuries at the city’s beaches, which he attributes to a 1990 Army Corps of Engineers project that changed the way the waves break on shore.

Eighteen months into his rehab, de Satnick said he found out about Life Rolls On, a subsidiary of the Christopher & Dana Reeve Foundation, which aims to use action sports as a way to inspire possibilities despite paralysis.

“It was my goal to continue to heal and go out and participate in the fundraisers and the events in California,” de Satnick said.

Eventually, he said, the event organizers asked him to coordinate fundraises and surfing events on the East Coast. De Satnick said he was able to bring a surfing event and a golf fundraiser in September with the help of Todd de Satnick, Steven DelMonte, Chris Curley, Jeff Walden, Greg Shannon, Dean Lyon, Mike Baroco and Steve Mitchum, a group of local surfers, some with family and friends that have been affected by c-spine injuries.

He also credited the borough of Wildwood Crest for “opening the flood gates to whatever we needed.”

Over 200 volunteers were at the borough’s Rambler Road beach on Saturday to help a group of 35 adaptive athletes get in the water and ride some waves, according to de Satnick’s estimates.

He said that about 15 volunteer were matched to one surfer on land, helping them get in and out of wetsuits. In the ocean, another group of volunteers formed a funnel from deep to shallow water to help guide the surfers. De Satnick said that another set of volunteers ride tandem with some of the adaptive surfers.

“No one volunteer’s job is more important than the next,” he said.

While the volunteers are crucial, the day really is about the participants, de Satnick said.

The participants have varying degrees of mobility, he explained. “Their injuries also vary from car accidents to falls when they were little.”

Some were avid surfers before their accidents and others caught their first wave during the event, de Satnick said.

“There are a few athletes that come to every single event,” he said. “But for those that are doing this for the first time, there is a level of comfort they achieve because they are around others that suffer from the same injuries.

“These athletes are putting trust in the volunteers, people that they have never met, in order to get more freedom. I give huge amount of credit to the athletes that show up,” he said.