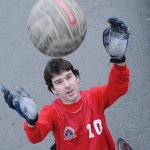 With the Vancouver games in the rear-view mirror, three local athletes begin their drive to share in the Olympic experience

(PETERBOROUGH) The journey to the Olympics is a long and difficult road to travel.

As hosts for the 2010 winter games, Canadians were exposed to the trials and tribulations of many of our Canadian athletes as they poised to make the cut to compete for gold on their home soil.

Now, with the Vancouver games in the rear-view mirror, three local athletes begin their drive to share in the Olympic experience. Each athlete has had their fair share of detours on the path to their Olympic dream, but none more than Cody Caldwell. His Olympic dream began as another athletic path ended. The former AAA minor Petes’ goalie suffered a severe spinal cord injury in June 2009, while swimming, fracturing two vertebrae and leaving him confined to a wheelchair. Flash forward two years and Caldwell is now one of the up and coming wheelchair rugby players in the country.

As a member of the Ontario Lightning wheelchair rugby club, the 23 year old, is now gaining recognition in his sport, receiving individual honours at the Coloplast Canadian Wheelchair Rugby Championships, as his team won the division-two Canadian title. Most recently he traveled to Germany as a member of the Canadian development team to participate in a 10-day training camp and culminating in a tournament against 60 of the world’s best club teams. The environment was reminiscent of his days as a Pete.

“It kind of reminded me of hockey, being on the bus going back and forth to the gym and having team dinners. It was a good experience”, says Caldwell.

Although not on the roster for the 2012 games, he has his sights set on playing for Canada in the 2016 Paralympic games in Rio de Janeiro, Brazil.

“The main goal, like every sport, is to win gold,” he explains.

Canadian Heptathlete, Susan Coltman has had to overcome her own obstacles on the way to her Olympic goal, specifically London 2012. Having suffered a heart-breaking disappointment when she missed qualification for the 2008 Beijing Olympics by three-1ooths of a second, she had to decide whether or not she was going to commit herself to another four years and strive for a chance at an Olympic berth. In 2009, after training in Holland for five years, Coltman decided to make the move to train closer to home at the University of Toronto. The former Peterborough Collegiate student was faced with a new coach and new training structure. It was a move she won’t soon forget.

“It was disastrous,” recounts Coltman.

“Our styles didn’t work together. I ended up getting badly injured.”

Now recovering and in the hands of a new coach at York University, the 30 year old is making a push to qualify for next summer’s Olympic games. The challenge with the heptathlon is that one has to master not one, but seven different events: 100 meters hurdles, high jump, shot put, 200 meters, long jump, javelin throw and 800 meters. The scores are calculated after each event and each score is then total for a final placing. She missed the 2008 games by what turned out to be three points, something she doesn’t want to let happen again. In the mean time, she’s working to regain her focus and grow accustomed to her new coaching staff for next year’s qualification meet in Ottawa at the end of July 2011.

“At the end of the day my ultimate goal is about reaching my potential. I want to know that I left it all out there and hopefully that should be enough to make the Olympic standard,” she explains.

The setback of injury is one to which basketball veteran Jesse Young can relate. After being sidelined by an ankle injury last year, Young returned to Peterborough for rehab and worked as the assistant coach for Fleming College’s men’s basketball team. His time spent as a coach allowed him to gain back a positive frame of mind in spite of his injury and gain a new perspective of the game. It seemed to work. Once he had recovered, he received a call to return to the court with his Italian team Bancateras Taramo. The roster for the Canadian men’s basketball team hasn’t been set, with training camp not scheduled to begin until later this summer. Once it’s completed the Canadian squad has a serious challenge ahead. Olympic qualification begins in late August at the Americas Championship tournament in Mar del Plata, Argentina.

There they will have to finish top two against the worlds best, including the host Argentineans who are currently third in the world. Failing that, they will have another opportunity later in the year at a tournament yet to be named. Due to his competition schedule Young was unavailable for comment at time of publication.

In 2010, the eyes of Canada were glued to Vancouver as we celebrated the success of our athletes on the international stage.

This Canada Day, lets ensure that our focus is closer to home and put our hearts behind this trio of contenders on the road of Olympic dreams.