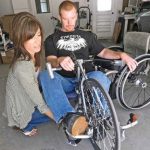 Kevin Mather loved to ride his bike. On July 3, 2009, the Valencia resident pedaled along Sierra Highway with a dozen buddies on a beautiful Southern California morning.

Moments later, Mather was lying on the asphalt, the white line that divided the bike lane from the road now at eye level. A car’s broken rear-view mirror lay shattered next to him. Mather was the victim of a hit and run, the driver turning himself in just an hour later.

Though he couldn’t get up or move, Mather said, “I didn’t freak out.”

Mather’s wife, Tiffany, on the other hand, was a little more concerned. An insurance claims adjuster, she knew that her husband being airlifted to a hospital in Los Angeles was not good news.

The answer to that question, thankfully, was “No,” but Mather’s ultimate diagnosis was still a shock to the active couple. At age 27, Mather was a paraplegic, paralyzed at the 12th vertebrae.

Recovery
Several surgeries, including the insertion of steel pins, plates and rods into Mather’s back, were performed in the first few weeks following the accident, followed by months of grueling physical therapy.

“It was like being a baby. I had no idea what was going on; all I knew is my body wasn’t working, and I couldn’t do anything for myself anymore,” Mather said.

During his 2 1/2-month hospital stay, a stranger in a wheelchair rolled into Mather’s room. His name was Andrew Skinner, and he was the founder of Triumph Foundation, a Canyon Country-based nonprofit organization that offers resources and assistance to families with spinal-cord injuries.

“It was too much to take in at first. I thought, ‘I’m a gimp now. I’ll never get back to normalcy,’” Mather said.

Mather took the Triumph Foundation gift basket stocked full of brochures and information before heading home to his new life.

Making changes
With Mather in a wheelchair, the couple’s second-floor condominium was no longer feasible. The Mathers moved in with friends, who offered their more handicap-accessible home, for seven months before the Mathers relocated to their current ranch-style, one-story house in Valencia.

Just about everything had to be remodeled to accommodate Mather’s wheelchair. Counters and a sink were lowered in the kitchen. Carpet was ripped out and replaced with hardwood. The backyard was outfitted with trails for Mather to wheel through, and inconspicuous concrete ramps were installed next to doors for easy entry.

“The first year, I was just getting into the idea that I couldn’t do anything like I used to. I couldn’t just get up and fix something, I wasn’t really that guy anymore,” he said. “It took a lot of time to get used to, but I learned how to deal with it without getting all bummed out.”

Eventually, Mather was outfitted with prosthetics and crutches, which he found to be more challenging than the wheelchair.

“It’s the biggest workout I’ve ever done. I’m drenched in sweat by the time I reach the couch,” he said. “It’s like walking on stilts that happen to be my legs.”

Tiffany Mather quit her job to assist her husband full time. “Obviously, this affects the dynamics when you’re married, to become a wife, caretaker and advocate,” she said. “Some people would say to me, ‘Hey, this is not what you signed up for.’ But I married Kevin for better or for worse. I’m not going claim to love him and then walk away when life gets rough.”

Mather has continued work as an assistant project manager for Tejon Ranch’s Centennial home project, moving from field work to managing a staff and data for the company. He drives to work in a Ford F-150 outfitted with hand controls.

“They’ve been great with me so far,” Mather said with a smile.

Triumphant
That first year, the Mathers also became involved with the Triumph Foundation. Mather signed up for games, such as wheelchair basketball and hand-cycling. He gained something more than exercise in the process.

“There’s no road map for this. The people I’ve met through Triumph Foundation are great. They’ve motivated me not to let a spinal-cord injury hold me back. A couple of the guys have Paralympic dreams,” he said.

Mather has a few dreams of his own. He is taking gliding lessons, and will man his own plane once a hand-controlled version becomes available.

In the summer, the Mathers, now married for six years, take part in Triumph Foundation’s outdoor adventures program, which offers kayaking, water- and jet-skiing, and paddle boarding to its differently abled participants.

Through such activities, the Mathers have made connections that feel more like family.

“We have people over at our house all the time. It’s really helped to have so many friends in the same situation. Those friendships have become so deep in such a short term,” Tiffany Mather said. “It’s an unspoken understanding, and the ability to help each other that able-bodied people just can’t relate to.”

They’ve also become board members of Triumph Foundation, which is hosting its first gala fundraiser in the Santa Clarita Valley — a casino night with live music and a silent auction to be held at the Hyatt Regency Valencia at 6:30 p.m. July 16.

“We’re hoping we can get a lot of money raised to help sponsor the camp or provide equipment and access construction, whatever’s necessary to families with spinal-cord injuries,” Tiffany Mather said.

“If someone needs a shower chair, and their insurance doesn’t pay, Triumph Foundation is like, ‘Hey, we’ll get you one.’ Just knowing they were there helped me,” Mather said.

When asked what he’s learned from the accident, Mather grinned wryly and replied, “Don’t ride your bike on the street!”
Tiffany Mather laughed as Mather continued.

“Actually, if I’ve learned one thing, it’s that it’s not your situation that determines who you are. It’s how you choose to deal with it. No one has a perfect life, ” he said.

Christopher Reeve Foundation Awards Over $700,000 in Quality of Life Grants

Local band jams for cause