Queen on wheels seeks next crown 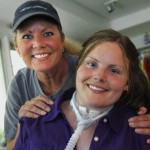 Jenni Taylor, 24, of Minnetonka, is the reigning Ms. Wheelchair Minnesota. A quadriplegic after a car accident, she speaks to kids with a message of not being afraid of people in wheelchairs.

Jenni Taylor isn’t supposed to be able to sit up without support, but there she is, exquisitely balanced on the edge of her bed.

She isn’t supposed to be able to breathe without her ventilator either, but a slip of her breathing tube once forced her to try contracting her throat muscles just enough to bring in some air until someone heard the alarm.

She isn’t supposed to be a quadriplegic, either. Who is? But accidents happen.

Nine years ago, when Taylor was a high school sophomore, the small sports-utility vehicle in which she was a passenger missed a curve and rolled. She broke one of her little toes — and her neck. She has no recollection of the accident, and says that’s just as well. Young people in general tend to look forward, but Taylor seems to have an almost steely determination to never waste time looking back.

Today, the reigning Ms. Wheelchair Minnesota has moved on to painting, blogging, attending college, and speaking to kids with a message of not being afraid of people in wheelchairs, even if they have this weird tube attached to their throat.

“I want to be an advocate to showcase the abilities of people with disabilities,” Taylor said. “We have a curiosity of the unknown, so the staring and pointing is understandable. But I want them to know it’s OK to ask a question. It’s OK to befriend someone like me.”

Taylor, 24, has a disarmingly level gaze, and stays in a room filled with images of angels and butterflies, as well as a hospital bed, a ventilator unit, a wheelchair, slings, braces, a ceiling track, and an elevator door. The clothes in her closet are arranged by color — “I’m a typical girl,” she said, “with maybe a little OCD.”

Her home in Minnetonka is a triumph of remodeling, driven by clouds of depression. In the early days after the accident, Taylor’s world was pretty much confined to the bedroom of their townhouse, said her mother, Lori, whose own world was upended by the 24-hour presence of a nurse, as well as the necessity to quit her job. “You really have to live it to understand it,” she said.

When Taylor began resisting getting out of bed, seeing no point in the effort, Lori Taylor set about finding a larger home and remodeling it to be truly handicapped-accessible, which means that Taylor now has the run of the house and the small backyard patio.

She paints with a brush in her mouth, and blogs at www.thesitethatbreathes.blogspot.com, its name referencing how her own ability to breathe depends upon a ventilator. She can go out with friends, although her stamina in the wheelchair maxes out after about eight hours. During the school year, she attends Normandale Community College, majoring in communications.

“You want to see a good one?” Taylor asked, glancing conspiratorially at her physical therapist, who then slowly unfolded Taylor’s hand. Almost immediately, Taylor’s body began to shake, head to toe, shimmying against her bedsheets. Five seconds. Ten seconds.

Then the spasm subsided.

The spasms are a little unnerving, but Taylor likes them, partly because they relax her muscles, but they also tone them. For someone without the power of movement, she’s in remarkable shape — maybe not so far as you’d think from the softball pitcher she once was.

She credits a rigorous therapy program for counteracting the curvature of her spine, which began causing intense pain about four years ago. Taylor has what’s called an incomplete spinal cord injury — meaning not totally severed — so she has some feeling and the potential for moving some muscles.

Her initial insurance covered only eight therapy sessions, once a week for two months — not nearly enough to manage pain, much less maintain her musculature, said Nicole Rennie, a physical therapist and founder of Senior Abilities Unlimited. Rennie has worked with Taylor for seven years, four times a week, using the same principles she uses with older people to help them resist falling and remain independent.

The therapy is private pay, which Rennie says gives her more latitude from having to meet most insurance policies’ need for constant, measurable improvement. For Taylor, the point isn’t recovery as much as being able to manage her pain and avoid the far more costly expense of further surgeries and painkillers. Revising insurance limitations is among the issues for which Taylor intends to advocate as Ms. Wheelchair Minnesota.

Already, she’s been the face of those whose medical assistance was threatened by the state shutdown, appearing at a hearing at the Ramsey County Courthouse last month, where a motion representing the thousands of disabled people who rely on state assistance was filed in her name. Taylor’s care is also supported by a trust fund set up after her accident.

On to rand Rapids

The Ms. Wheelchair America program recognizes and advocates for women who use wheelchairs. The competition is based on contestants’ communication skills in educating the general public, the business community and elected officials about issues important to the disabled.

The national competition begins Aug. 1 in Grand Rapids, Mich., which means that Taylor will be flying for the first time since her accident, along with her mother and sister, nurses, her physical therapist and medical equipment. It’s a daunting plan, physically and financially, and she’s been receiving donations through her blog and Facebook page, Ms. Wheelchair Minnesota 2011.

However the experience turns out, it will be just one year among many that some doubted she’d see, and among more that she’s determined to have. Her long-term hopes are rooted in advances in stem-cell research. “One day, it could amount to something,” she said. “But the fact that I have some movement is enough.”

The biggest thing, she added, “is to not take things for granted. When people have an itch on their face or a piece of hair hanging down, they just unconsciously scratch it or move it over. Every little thing, someone has to do for me.”

Sometimes, in the course of a therapy session, Rennie will direct Taylor’s fingers so they brush against her forehead, like anyone else’s would.

Atlanta rehab hospital to provide free care to some vets with...