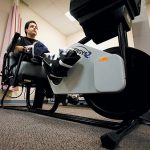 Now that a special bike for people with spinal cord injuries has arrived at a Virginia Beach facility, he also won’t have to miss his workout.

Albright said he lost the use of his legs during back surgery in August 2004. Last May, he started working out on an Ergys 2 bike – the same one that Christopher Reeve used after the actor’s horse-riding accident and that his family donated after his death. The bike uses electrical impulses to stimulate the muscles to pedal.

Before that, Albright, 35, would try exercising by pushing his wheelchair around with his arms, but that wasn’t very satisfying.

“The only time I got good sweating was when it was 100 degrees outside,” Albright said.

Problem was, the closest Ergys 2 he could find was Reeve’s old bike at the state-operated Woodrow Wilson Rehabilitation Center in Fishersville, near Staunton. So he made the trek from his Suffolk home a few times a month, worked out for an hour one day, had a post-workout snack at a nearby McDonald’s, stayed overnight, then worked out again the next day before heading home.

“It got to the point where it was starting to get a little expensive, so I went every other week,” Albright said.

A couple of weeks ago, an Ergys 2 arrived at Hilltop Therapy Center in Virginia Beach.

“David was here the next day,” said Debbie Kaye, a Physical Therapist at the facility, part of Sentara Healthcare. A grant from the Commonwealth Neurotrauma Initiative paid for Ergys 2 bikes in Virginia Beach and a few other localities in the state, including Richmond and Roanoke.

Kaye said exercising on the Ergys 2 can help undo some of the effects that physical inactivity forces on people with spinal cord injuries. It improves circulation, increases muscle mass, helps control weight – pretty much what exercise does for everybody.

“I wish something like that was more affordable for everybody,” said Scott Dickerson, a 31-year-old who became a Paraplegic at 20 after a car accident. “It’d be great to just go home and just hook up to that, watch the news and do 20 miles.”

Dickerson had his first session last week and as Albright told him he would be, he’s addicted. Both started off with the words “it’s hard to explain” when describing how they feel after a workout. While they don’t have feeling in their legs, it’s as though they kind of do.

“My legs are tired now,” Albright said Monday after biking 9.8 miles in an hour. “It’s like a new feeling, like you know how when you’re standing on your feet all day?”

“We hope this wears out from use,” Kaye said. After initial training, Hilltop will treat the bike workouts like clients going to the gym, charging $7 per workout or 10 for $60.

C ost is still a barrier for many. Insurance is spotty about covering the training by health professionals, Kaye said, and in addition to the bike cost, riders have to buy their own electrodes every couple of months at roughly $50 a set.

It still seems like a great deal to Albright, who, after a mere half-hour drive Monday, hooked up his set of 12 electrodes, got in the bike and started pedaling. He plans to keep coming three times a week for an hour’s workout, increasing its difficulty as he gets in better and better shape.

About the only thing missing is something to watch. The facility has no TV. Albright’s happy listening to his music on his headphones, but if there’s ever a Ergys 3, he knows what he’d add.

Split second can change a life