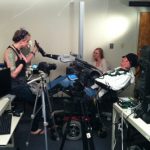 PITTSBURGH, Oct. 10, 2011 – Seven years after a motorcycle accident damaged his spinal cord and left him paralyzed, 30-year-old Tim Hemmes reached up to touch hands with his girlfriend in a painstaking and tender high-five.

Mr. Hemmes, of Evans City, Pa., is the first to participate in a new trial assessing whether the thoughts of a person with spinal cord injury can be used to control the movement of an external device, such as a computer cursor or a sophisticated prosthetic arm. The project, one of two brain-computer interface (BCI) studies underway at the University of Pittsburgh School of Medicine and UPMC Rehabilitation Institute, used a grid of electrodes placed on the surface of the brain to control the arm.

It was a unique robotic arm and hand, designed by the Johns Hopkins University Applied Physics Laboratory, that Mr. Hemmes willed to extend first toward the palm of a researcher on the team and a few minutes later, to his girlfriend’s hand.

“I put my heart and soul into everything they asked me to do,” he said immediately after his achievement. “I got to reach out and touch somebody for the first time in seven years.”

“Seeing Tim reach out with a mechanical arm to touch his girlfriend was an unexpected and poignant bonus for all of us who are involved with this exciting project,” said co-principal investigator Michael Boninger, M.D., director of the UPMC Rehabilitation Institute.

“This first round of testing reinforces the great potential BCI technology holds for not only helping spinal cord-injured patients become more independent, but also enhancing their physical and emotional connections with their friends and family,” added Dr. Boninger, who also is professor and chair of the Department of Physical Medicine and Rehabilitation at Pitt’s School of Medicine. “It further motivates us to make this technology useful and available to those who need it.”

On Aug. 25, an electrocortigraphy (ECoG) grid, about the size of a large postage stamp, adapted from seizure-mapping brain electrode arrays, was placed on the surface of Mr. Hemmes’ brain during a two-hour operation performed by co-investigator and UPMC neurosurgeon Elizabeth Tyler-Kabara, M.D., Ph.D., assistant professor, Department of Neurological Surgery, Pitt School of Medicine.

“Before the procedure, we conducted several functional imaging tests to determine where his brain processed signals for moving his right arm,” she explained. “We removed a small piece of his skull and opened the thick layer of protective dura mater beneath it to place the grid over that area of motor cortex. We then put the dura and skull back with the wires on the outside of the skull but under the scalp.”

Dr. Tyler-Kabara tunneled the connecting wires under the neck skin to exit from the upper chest, where they could be periodically hooked up to computer cables. Six days per week for the next four weeks at home and on campus, Mr. Hemmes and the team tested the technology. The researchers used computer software they developed in earlier studies to interpret the neural signals sensed by the brain grid.

After watching a computer-generated figure move an arm, Mr. Hemmes began trying to guide a ball from the middle of a large television screen either up, down, left or right to a target, within a time limit. With practice, he could do this two-dimensional task without any computer assistance or what the researchers call “100 percent brain control.” He then performed a similar task with the arm, reaching out to touch a target on a large, desk-mounted panel.

It wasn’t the simultaneous thought-and-move process that he knew before becoming paralyzed. Instead, he imagined flexing his thumb, which created a brain signal pattern that the computer then interpreted as “move left,” or bending his elbow to move the object right, explained co-principal investigator Wei Wang, M.D., Ph.D., assistant professor, Department of Physical Medicine and Rehabilitation, Pitt School of Medicine.

“He mentally associated specific motor imageries with desired movement direction,” he said. “It required concentration and patience, but this process seemed to get easier for him with practice, just like when someone learns to drive a car with a manual transmission. In future studies, we also will test other approaches, including the participant simply thinking up for up, down for down, and so on.”

After about eight sessions, Mr. Hemmes tackled more complicated tasks. While wearing special goggles to properly view a three-dimensional TV screen, he moved the ball in the previous directions, and also to the front or back. He also practiced moving the arm in all directions, culminating in the joyful moments after formal testing had been completed when he reached out to Dr. Wang and to his girlfriend. Dr. Tyler-Kabara removed the ECoG brain grid and wiring in a short operation the next day, Sept. 22.

The researchers are now analyzing the data, and are seeking at least five more adults with spinal cord injuries or brainstem strokes who have very little or no use of their hands and arms for additional studies.

They also are looking for participants for a year-long trial of another kind of brain-computer interface that is a 10-by-10 array of tiny electrode points that penetrate the brain tissue by less than 1/10th of an inch and pick up signals from 100 individual neurons. Two of these grids will be put in place, one in the brain region that controls hand movement, and one in the region that controls the arm, said co-principal investigator Andrew Schwartz, Ph.D., professor, Department of Neurobiology, Pitt School of Medicine.

“We anticipate that these penetrating grids can pick up very clear signals from the brain to reveal what motion is intended by the participant,” Dr. Schwartz said. “The second grid will allow us to see what might be possible in controlling the fine movement of the fingers and hand, which is far more complicated but also could offer more useful function for the participant.”

In his other experiments, a monkey implanted with the penetrating grid has been able to use an APL arm to reach out and hold a doorknob-like object, building on earlier work in which a monkey was able to grasp a marshmallow with a gripper device on a less sophisticated robotic arm and feed the treat to itself.

The team plans to make the technology wireless, and to include sensors in the prosthesis that can send signals back to the brain to simulate sensation.

It might be possible to connect brain-computer interfaces to existing devices that stimulate muscle fibers in the arm and hand, in effect bypassing the spinal cord injury to allow these individuals to use their own limbs again, the researchers said. That approach could be studied in future trials.

An example of multi-agency cooperation, funding for the two projects comes from the National Institute of Neurological Disorders and Stroke, part of the National Institutes of Health; the U.S. Department of Defense’s Defense Advanced Research Projects Agency; and the U.S. Department of Veterans Affairs, as well as UPMC University of Pittsburgh’s Clinical and Translational Science Institute.

Visit UPMC.com/BCI for downloadable video of Mr. Hemmes’ participation in the trial.

About the University of Pittsburgh School of Medicine

As one of the nation’s leading academic centers for biomedical research, the University of Pittsburgh School of Medicine integrates advanced technology with basic science across a broad range of disciplines in a continuous quest to harness the power of new knowledge and improve the human condition. Driven mainly by the School of Medicine and its affiliates, Pitt has ranked among the top 10 recipients of funding from the National Institutes of Health since 1997.

Likewise, the School of Medicine is equally committed to advancing the quality and strength of its medical and graduate education programs, for which it is recognized as an innovative leader, and to training highly skilled, compassionate clinicians and creative scientists well-equipped to engage in world-class research. The School of Medicine is the academic partner of UPMC, which has collaborated with the University to raise the standard of medical excellence in Pittsburgh and to position health care as a driving force behind the region’s economy. For more information about the School of Medicine, see www.medschool.pitt.edu.

About the UPMC Rehabilitation Institute

The UPMC Rehabilitation Institute combines clinical care and research to help patients regain independence and enhance their quality of life following debilitating illnesses or injuries such as stroke, spinal cord injury and traumatic brain injury. The Institute’s academic partner, the Department of Physical Medicine and Rehabilitation at the University of Pittsburgh School of Medicine, is ranked No. 2 in research funding from the National Institutes of Health (NIH) among physical medicine and rehabilitation programs across the country.