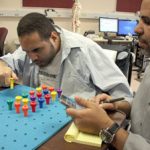 Precisely timed nerve stimulation in patients with spinal cord injuries improved their ability to use their hands, at least temporarily, researchers reported.

The non-invasive process increased the amount of force patients could exert with a finger for up to 85 minutes, according to Monica Perez, PhD, and a colleague from the University of Pittsburgh.

After stimulation, patients could also complete a dexterity task more quickly than before, the researchers reported online in Current Biology.

The study, involving 19 people with a cervical spinal cord injury and 14 age-matched healthy controls, “highlights the importance of the corticospinal tract … as an important target for intervention after spinal cord injury,” Perez said in a statement.

The corticospinal tract conducts nerve signals from the brain’s motor cortex to the spinal cord and plays a major role in voluntary movement, the researchers noted.

Transcranial magnetic stimulation has been under study as a treatment for depression and for some after-effects of stroke, while other forms of electrical stimulation have been studied in paralysis after spinal cord injury.

In this study, the researchers delivered transcranial magnetic stimulation to the hand representation of the motor cortex. Those signals were paired with signals derived from peripheral nerve stimulation of the ulnar nerve at the wrist.

The timing and order of the signals was important – to have an effect, the signals from the brain had to reach the corticospinal-motoneuronal synapses of the first dorsal interosseous muscle 1 to 2 milliseconds before those from the ulnar nerve.

A similar protocol with the order of the signals reversed had no effect, the researchers reported.

Participants were given 100 paired pulses every 10 seconds for about 20 minutes and then they were asked to exert force with the index finger and to perform a dexterity task, the so-called nine-hole peg test.

In that test, participants were asked to use the thumb and index finger to remove pegs from holes, set them aside, and then pick them up again and replace them.

The researchers found that the stimulation process significantly increased the force the injured participants could produce, by about 20 percentage points over baseline within the first 20 minutes (P<0.05).

A similar effect, but with a more rapid onset, was seen in the healthy controls.

As well, the average time it took for injured participants to complete the peg test fell by about 15% points from baseline within the first 30 minutes, changes that again were significant (P<0.05).

“Human electrophysiology can be a powerful tool for developing therapies,” Perez commented. “We need to explore new targets to improve rehabilitation strategies by taking advantage of our knowledge in human physiology and their mechanisms.”

Couple comes closer together by seeking paralysis cure and competing in...