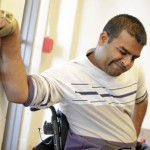 Harmandeep Saini needed someone to feed him, brush his teeth, give him his medication and put his bus token in the fare box after a motorcycle accident left him a quadriplegic three years ago. Today, the 25-year-old can do these things on his own thanks to a promising new therapy that has given him back some control of his hands.

Functional electrical stimulation, or FES, involves using small amounts of electricity to push muscles into action and retrain the central nervous system. It is still experimental, but a national clinical trial is now getting underway with funding from the Rick Hansen Institute. 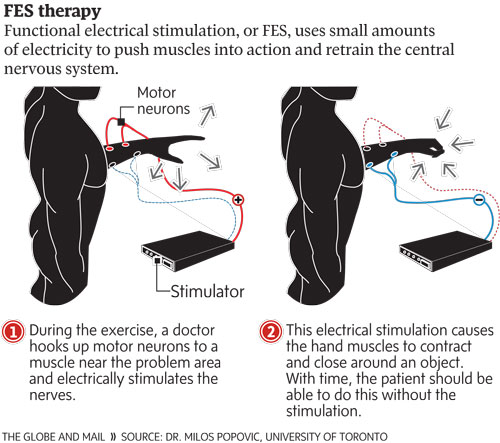 Mr. Saini lives with his parents in the Toronto area and received the therapy about six months after his accident as part of small preliminary study conducted by Milos Popovic and his colleagues at Toronto Rehab and the University of Toronto.

During the one-hour sessions, an occupational therapist electrically stimulated the nerves in Mr. Saini’s hands with a weak current as he attempted to grasp and manipulate playing cards, dominoes or other objects.

At first, Mr. Saini says he couldn’t pick anything up without the electrical stimulation, which caused the muscles of his hands to contract and close around the object at the right moment.

He had the therapy five times a week for two months and learned to grasp and release things on his own, without the stimulation. The muscles in his thumbs, fingers and arms grew stronger and he was able to shave, pull up his pants, pick up a full water bottle and other small acts of independence that made an enormous difference in his life. He can now get the token in the box after he gets on the bus rather than having to ask other passengers for help.

“I can feed myself if someone cuts up my food. But I am working on cutting it myself,” Mr. Saini says.

The preliminary study, which involved 22 patients, showed the therapy holds promise. The new multicentre study, funded with close to $500,000 from the Rick Hansen Institute, will involve 80 quadriplegics who are unable to move their hands or lower arms.

All the volunteers have incomplete spinal cord injuries, which means they have some feeling or function below the area where their spines were injured. Mr. Saini, for example, can tell if someone touches his toes, but he can’t feel heat or cold. About 65 per cent of quadriplegics have an incomplete injury.

It is still unclear exactly how the therapy works, Dr. Popovic says, although animal studies suggest that it activates cells in the spinal cord.

“Most people see the spinal cord as a conduit or a cable, but it is an extension of the brain,” Dr. Popovic says. Like the brain, it has grey matter and circuitry involved in movement.

“If we can tap into that after an injury, activate it and help it connect to upper parts of the brain to enable voluntary control, then we are winning.”

Initially, the treatment was unpleasant for patients, so he and his colleagues designed a portable unit that doesn’t cause as much discomfort.

It has also shown promise in helping patients who can’t move their hands after a stroke. Every day, 60 Canadians a day suffer severe upper limb paralysis from either a stroke or a spinal cord injury, Dr. Popovic says.

Bill Barrable, chief executive officer of the Rick Hansen Institute, says the research has potential to improve the lives of people paralyzed by spinal cord injuries.

“We envision a world without paralysis after spinal cord injury, but at the same time, people are living with it right now. If you look at the last 25 years, there hasn’t a been a singular “aha” moment that has been a game changer. However, there has been a whole spectrum of smaller things that have moved the needle on paralysis by about 30 per cent, which is huge.’’