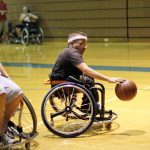 With Nov. 1 quickly approaching, there is still no start to the NBA season in sight. If you’re a basketball fan and you’re feeling depressed, angry and/or incomplete right now because of the lockout, you’re not alone. Even with college basketball still carrying on as usual, without the NBA, I fear that I won’t get my appropriate dose of hoops this season.

Thankfully, exactly what the doctor ordered to counter these gloomy lockout side-effects can be found right here in Mesa. Allow me to introduce you to the Banner Wheelchair Suns of the National Wheelchair Basketball Association.

After all, aren’t you sick of greedy owners, lackluster defense and egotistical superstars who refer to themselves in the third person and throw chalk in the air like they’re at some sort of gaudy gymnastics meet?

I am. So I’m prescribing myself — along with other frustrated pro basketball fans in need of some bonus bucket love — with a forget-the-NBA drug: the Banner Wheelchair Suns.

The organization includes three squads — the Suns men’s team, the Mercury women’s team and the JV Suns for kids aged eight to 18 — and is open to inclusion for people with a wide variety of disabilities. Anyone with a spinal cord injury, a lower extremity amputation or lower extremity bone-on-bone damage (such as multiple knee surgeries) is eligible to participate.

“A lot of people don’t realize that they would qualify to play wheelchair basketball,” said Eve Hampton, a 24-year-old ASU graduate student and member of both the Mercury and Suns. “You don’t have to use a wheelchair (off the court) to play.”

Wheelchair basketball has the same exact rules as normal basketball, except for a slight difference in dribbling. The speed of the game is astoundingly quick, especially in the NWBA’s Championship Division that the Suns play in. The fast break is king, said five-year Suns vet Dustin Ferreira, 28, who even went so far as to describe the pacing of play as “a little bit faster than the NBA.”

In a season that spans from October to March, all three Banner Wheelchair teams play various tournaments both locally and on the road. Meanwhile, the NBA lies dormant. So why not get to know the Suns? As Ferreira, who has been playing wheelchair basketball since the age of eight, pointed out, “At least we’re playing, right?”

Not only are they actually playing this season, but also unlike the NBA the Banner Wheelchair Suns value the concept of team (gasp!) over everything else.

“Cohesiveness is definitely more important when it comes to wheelchair basketball,” said Andrew Reilly, 27, a 2008 ASU grad that also played collegiately at UA while in law school. “If you work well as a team, you make it so much easier on each other. If you don’t work well, you’re going to make it that much harder. That cohesiveness is extremely important.”

Equally important is a player’s ability to control his or her chair out on the court. Learning to turn on a dime at top speed and use your chair as a pick, among other necessary maneuvers, are skills that must be mastered over time.

As Ferreira said: “There’s such a finesse to it.”

Yes, finesse, and a bit of pain, too, especially if you get your fingers jammed in between chairs. But at the rate that Ferreira and others report getting tossed onto the hardwood during an average game, I suppose finger injuries are the last thing they should be worried about.

“(Last season), I fractured my head, broke three ribs,” Ferreira said, all while showing me the latest damage to his digits. Then he casually added, “Oh, and I broke my nose. And had a concussion. But I still played two months later (at nationals), I still finished the season.”

Hey, who doesn’t like a sport with an entertaining mix of speed, finesse, toughness and dedication, topped off by a dash of bloodshed?

I’ll be the first to admit that I thought wheelchair basketball was all roses, like a regular season NBA game where guys are going through the lane untouched on the way to the bucket, until I witnessed a few Suns partake in an intense two-on-two scrimmage.

That’s when I concluded that wheelchair basketball isn’t quite exactly like normal basketball. It’s more intense, perhaps a bit more violent, and unlike their able-bodied, professional counterparts, these ballers are simply grateful to play the game.

Not to say that winning isn’t a huge factor. The Mercury is focused on qualifying for the national tourney this season, while the No. 7 Suns are gunning to bring home a championship.

You know, this NBA lockout is almost starting to look like a blessing in disguise.

Now if only, through some sort of super-karma from the Basketball Gods, the Suns could get their season-opening tournament (Nov. 4, Mesa Broadway Rec Center) televised, then fans would only be a few days behind in their basketball fix.

“We joke about it, sometimes,” said 20-year-old Robby Reed, a student at Mesa Community College who is currently weighing wheelchair basketball scholarship offers from both UA and University of Texas-Arlington. “Since there’s an NBA lockout, they should televise our games instead.”

I think Robby’s really on to something here.

For more information on the Banner Wheelchair Suns go to http://www.bannerwheelchairsuns.org.