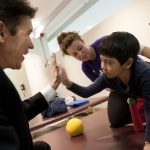 Pat Rummerfield is a busy man. He is a marathoner, an Ironman Triathlon finisher, a speedboat racer and a world-speed-record-setting auto racer. He is a motivational speaker, an avid researcher and fundraiser for spinal injury treatment.

Rummerfield is a quadriplegic with no feeling in his legs from the knees down since he was in an auto accident in 1974.

With two-thirds of his spinal cord non-functioning, by all accounts, he shouldn’t even be able to walk. As detailed in a 2008 Post article, he continually baffles doctors and scientists, who hypothesize that he has been able to maintain muscle function through continual exercise.

Now 58, Rummerfield lives in Chesterfield, Mo., with his wife of six years, but he spends two weeks each month at the Kennedy Krieger Institute’s International Center for Spinal Cord Injury in Baltimore. As a member of the Krieger staff, he holds the title of director of patient outreach/patient liaison, serving primarily as an inspiring role model for patients who have suffered debilitating spinal injuries. He is also always on the lookout for new products and techniques to help spinal injury patients.

“I spend most of my time trying to help those that aren’t as fortunate as I am,” he says, referring to the pain and mobility challenges he suffers as a quadriplegic.

In addition to enduring several complicated knee operations, broken legs and fractures, and other health problems, Rummerfield must constantly step up his efforts to keep his body functioning as he ages. This includes more frequent hand and leg therapy for longer periods.

But he’s a pro at applying the same optimism and goal-setting he uses with patients to motivate himself.

In 2008, he set out to raise money for spinal cord research by running marathons on all seven continents in only three years. A serious knee operation led him to curtail those ambitions, but he says he believes he still can run three or four good marathons. He even plans to climb some mountains. “I want to do Mount Kilimanjaro maybe in August,” he said.

But he has begun focusing more on other passions.

“I have been concentrating on auto racing. It seems like a great way for fundraising,” he says. Since 2008, he has obtained a FIA pro racing license, tested at Watkins Glen International in New York in a Grand Am series GTO race car, qualified for the NHRA drag racing series and competed in his first drag race. A boat-racing record also tops his list of goals.

There’s no stopping for Rummerfield, only shifting gears.

cotton to the core Jim MacLaren