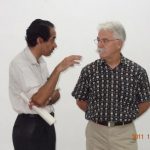 He is one of the world’s foremost authorities on this subject and the first to try olfactory ensheathing cells on humans with SCI. In an email interview, he explained to S. Vaidya Nathan the current state of stem cell research for treating people with spinal cord injury.

What is the current state of stem cell research, especially relating to spinal cord injury?

Across the world, we are still in the very early stages of research into stem cells and SCI.

Research into the possibility of repairing a damaged spinal cord is taking place in several places. Stem cells are one kind of treatment that is being explored; others are certain drugs and different cell types such as olfactory ensheathing cells on which I work.

Most of the research is still based on animal models, mainly rats. In animals, there are a variety of stem cells — such as bone marrow stem cells, neural stem cells and embryonic stem cells — being tested.

Results have been encouraging, but from here to using them in human beings is a long step away.

The accepted path for translating from animal experiments to humans is staged clinical trials, which involve three stages. A Phase I trial is a test of safety, the first step in moving from animals into humans. Phase I trials do not prove anything more, but are a must.

What is the pace of progress in this research?

We must all understand that research on using stem cells for SCI is proceeding only in ‘baby steps’. This is likely to be the trend in the years ahead, too. The spinal cord is an extremely sensitive part and that is an added factor in the measured pace of work.

What has been the objective of your research in this field?

It is important to understand the risk of a new treatment and balance that against a hoped-for benefit. In SCI, risks such as losing function, gaining new pain and new/enhanced spasticity must be balanced against benefits that are proven in animals, but may not apply to humans.

When going from animals to humans, there are unknowns such as how many cells, where, how and how soon after the injury to transplant them, whether they will work in chronic injury and whether the procedure will damage incomplete injuries.

Could you tell us about your Phase I clinical trial in human beings?

This involved six persons with complete, chronic injury of the thoracic spinal cord. We took small pieces of tissue from inside their nose and using them, we grew their olfactory ensheathing cells in the lab.

Six weeks later, we transplanted their own cells into the injured part of the spinal cord in three people. The three who did not get a transplant acted as ‘controls,’ to ensure assessing clinicians did not bias their views.

To track whether there were any changes for good or bad, we assessed the six every three months for three years. There were no significant changes in any of the six. All we can say is that the procedure for transplantation of olfactory ensheathing cell is safe.

What has been the success rate of using stem cells in animal models?

We cannot set out a number, but cell transplantations have restored nerve connections between the brain and the lower spinal cord and improved walking, breathing and other functions in paraplegic rats.

What is your advice to people seeking stem cell therapy for spinal cord injury?

There are no stem cell treatments in the world today that have been fully tested in all stages of clinical trials. Part of the process of clinical trials is to report the outcomes and open them to public scrutiny for others to judge.

Yet ‘treatments’ using stem cells for persons with SCI are taking place in several countries, including China, Russia, Brazil and India.

Such treatments are not based on scientifically proven evidence that stem cells make a difference, partially or wholly, which means risks and benefits remain unproven.

We know illnesses and injuries can change with time and that a few improve without treatment. There is no concrete evidence that it is stem cell treatment that leads to improvement of any sort in a person with SCI.

Clinics offering ‘stem cell therapies’ do not state what cells they are transplanting, do not provide evidence of how the cells work in animals and whether they work in humans. Statements and testimonials from patients placed on websites or in newspapers are not ‘evidence’.

In this backdrop, it is important that every person with SCI adopts a rational approach. I understand several persons with SCI are spending vast sums on stem cell treatment in the hope of improvement. This is a sad state of affairs.

Persons with SCI must not go in for treatment using stem cell or olfactory ensheathing cells in any part of the world, as there is a long way to go to have a scientifically proven approach that also works.

The money that is or could be spent on stem cell treatment must be used to improve the quality of life in other ways and not wasted in this treatment now.