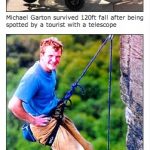 Climber Michael Garton’s life was saved by a man with a telescope after he survived a fall down a sheer rock face on a perilous Norwegian mountain.

Michael was two days into a solo climb to scale the notorious 3,600-feet Troll Wall , the tallest vertical rock face in Europe, when a piece of loose rock gave way and he fell 120 feet onto a sloping ledge still attached to his rope.

His neck was broken as he plunged leaving him paralysed and he lay motionless for ten hours unable to move and slowly freezing to death.

But his climb had been watched by dozens of people gathered in a car park several miles away and one of them, using a high powered telescope spotted 25 year old Michael’s motionless figure.

Police were alerted and a Norwegian Air Force Sea King helicopter, which was on exercise nearby, flew to the scene. Because it is a sheer rock face there is a ‘no rescue’ policy on the Troll Wall but the pilot decided to try and reach him.

A winchman was lowered and Michael was hauled into the helicopter. At that stage the crew believed he was dead but when they realised he was breathing he was whisked to a hospital 50 miles away.

He remained unconscious for 12 days and needed 16 defibrillator attempts to revive him after his heart stopped beating before before being flown back to the UK after three weeks.

Michael, is now recovering in the spinal injuries unit of Sheffield’s Northern General Hospital and although being paralysed from the neck down, he has started to regain some movement in his arms. Brave Michael has vowed to walk again one day and he is set to make his first ‘climb’ since the fall that so nearly claimed his life.

On May 26th he will be tackling Mount Snowden with the help of a 16 strong team made up of hospital staff and friends who will haul him up the mountain in a race organised by Back-Up Trust ,a national charity that supports people with spinal cord injury.

Said Michael, from Riddings, Derbyshire who has been climbing for 12 and has scaled some of the world’s highest peaks including the Matterhorn: ” It had always been my ambition to climb the Troll Wall and things were going well until I lost my footing.

“I blacked out when I fell and when I came round I realised I was paralysed. I was still attached to my rope and I was resting on a sloping ledge.

“Because the climb is so dangerous rescue attempts are never mounted because of the danger to the rescuers. I knew that and I knew I was paralysed.

“It was pretty cold and my temperature was 26c. It seemed hopeless and I couldn’t see any hope of surviving. Eventually I blacked out through Hypothermia. But my climb had attracted some local interest. There were people in a car park several miles away who were watching and I was spotted by a man through a telescope who alerted the police.

“He saved my life. Luckily the Air Force were training in the area. Apparantly they thought I was dead but despite the no rescue rule they decided to reach me although they thought it was a recovery mission.

“The crew were stunned to discover I was still breathing. I was unconscious and knew nothing of the rescue but I know that I’m lucky to be alive.”

Michael spent three weeks in intensive care in Norway, with parents Keith and Irene Garton from Riddings, at his bedside.

“The rescue crew were marvellous. They put their own lives and their aircraft at risk,” said his mum. After they saved him, there was a massive landslide, with rocks as big as buses falling down.” Michael, a chemical research and development worker with a Derbyshire company, recently gained a degree at Nottingham Trent University and hopes to restart his studies in September.

He is confined to a wheelchair but has regained movement in his arms and is hoping to leave hospital later this month and move into his own bungalow near the family home.

“Hopefully the use could come back to the rest of my body. Doctors say that with spinal injuries anything is possible and I will never give up hope of walking again,” added Michael.

” I am looking forward to tackling Snowden, I have climbed it many times before only this time I will be pulled up in my wheelchair but we are training hard and we plan to be the winning team.

A fund-raising drive has also been launched to provide Michael with a specialised wheelchair costing around £8,000.His sister Elisabeth, 24, is planning a sponsored 50-mile bike ride in June and two friends EthanWalker, 15, and his 14 year old brother Seth, of South Normanton,, near Chesterfield, will tackle a sponsored climb of High Tor, near Matlock.