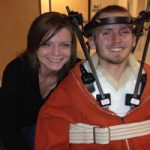 WOODSTOCK — Just over a month after a car accident left him almost completely paralyzed, Etowah High School student Tyler Rolison continues to fight to get back everything he lost.

The 17-year-old was at his grandmother’s house in Newnan for a week during Christmas. On Dec. 29, Tyler was driving home to Woodstock to celebrate New Year’s Eve when a car pulled out in front of him on Interstate 85. He swerved to miss the oncoming vehicle, causing his car to flip five times.

Tyler, a junior at Etowah, said the last thing he heard was the crunching sound of gravel and grass before he blacked out. After he regained consciousness, he began to yell for help.

“I remember the first guy on the scene was Matt Lupo, a Navy crash responder,” Tyler said. “He knew my neck was broken, so he disconnected my car battery, made sure there was no oil leaking and kept me from going into shock.”

Emergency services arrived soon after and Tyler was life-flighted to Atlanta Medical Center.

Pamela Deale, Tyler’s mother, said at first she didn’t think much of Tyler not answering his phone around 5:15 p.m. that day.

“When he didn’t call back, I called him every minute on the minute with no answer,”she said.

Finally, a woman’s voice answered the phone. It was a chaplain at Atlanta Medical Center. She explained to Deale that her son’s neck was broken and he was paralyzed from the neck down.

“I was just in shock,” Deale said. “He wasn’t doing anything wrong. He wasn’t texting, he wasn’t on the phone, he wasn’t drinking.”

Since that day, Deale said she and her son have been questioning what his future may hold.

“Tyler is considered a quadraplegic,” she said. “He can’t use his triceps and hands. He has some use of his shoulders.”

She added that though Tyler still has sensation throughout his body, his C5 cervical vertebra was broken in three places and a nerve was also pinched between the C5 and C6 vertabrae, causing his paralysis.

On Jan. 2, Tyler was transferred to Shepherd Center in Atlanta to undergo rehabilitation therapy for at least the next three months. He now wears halo brace, an apparatus that keeps his head and neck immobile to allow his spine to heal properly.

“He doesn’t know what the outcome is going to be,” Deale said. “It all depends on how his spinal cord heals.”

Tyler said he can move one finger in his left hand and has gotten stronger in his arms and shoulders because of therapy.

“I can lift myself up and transfer from my wheelchair to a bed or a chair,” he said. “Physical therapy is tough but I’ve got to do it if I want to get back to the way I was before.”

Deale said her son has a good attitude but still has his difficult days.

“I can’t imagine what he’s going through,” she said.

On his better days, he likes to visit four other wheelchair-bound teens he’s made friends with at the hospital.

“We like to try to run people over,” he joked.

Like many other high school boys, Tyler loves football and baseball. He also hopes start his own photography business one day.

“I started photography two years ago and I fell in love with it,” he said. “I like to take photos up in the mountains—streams, rivers, pretty much all nature.”

He said he tries to stay positive about the future and hopes for the best.

“I’m just hoping I get everything back,” he said. “You never know with a spinal cord injury. I could just get the use of my fingers or I could get everything. It just depends.”

Tyler added that he was thankful for everyone who has supported him throughout his recovery, including his mother, his grandparents, his aunt and all of his friends from Etowah and Woodstock High School.

Etowah High School Principal Keith Ball said that he hopes the best for Tyler and his recovery.

“All of the Etowah community is pulling for him and we want him back on Eagle Mountain sooner rather than later.”

Additionally, Deale lost her job last week. She hopes to regain employment soon as an executive administrator, she said.

Those who would like to make a tax-deductable donation to help with Tyler’s medical-related expenses can visit www.helphopelive.org and search for Tyler Rolison.