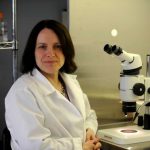 EAST GREENBUSH — Researchers in the Capital Region have created microscopic beads that may help heal spinal cord injuries when injected into wounds.

“For spinal cord-injured patients, there is nothing out there yet in terms of regenerative therapy,” said biologist Sally Temple, who is hopeful this new treatment will work in humans. Temple runs the not-for-profit New York Neural Stem Cell Institute on the University at Albany’s East Campus.

Two months ago, Geron Corp. stopped the world’s first clinical trial on embryonic stem cells because of funding problems. The trial was testing whether stem cells could heal spinal cord injures. The company said it will abandon the stem cell research entirely.

Temple’s team wanted to explore whether “sonic hedgehog,” a powerful protein, could repair spinal cord damage. The protein was given its inventive name by scientists who discovered it and thought it looked like a spiky hedgehog.

Sonic hedgehog, or Shh, is a growth factor that is critical in the body’s development motor neurons, the nerves that tell muscles what to do. It also directs production of the sheath that protects nerves.

One challenge, however, is that the protein flushes away quickly when injected into a wound, making it ineffective. Prof. Ravi S. Kane at Rensselaer Polytechnic Institute helped Temple’s team develop a microscopic bead to carry the protein. Made out of the material used in dissolvable sutures, the structure breaks down and slowly releases the protein, much like a slow-release capsule, Temple said.

“The mouse can walk better, it can go up on its hind legs better, it has more strength in its hind paws and it is better coordinated,” Temple said.

The research appeared in the January issue of the journal Biomaterials. The team also collaborated with researchers at Albany Medical College.

Temple said the $1 million research project was funded by the dwindling New York State Spinal Cord Injury Research Program. The program was created in 1998 and funded through surcharges on moving traffic violations. Since 2010, the state has used the surcharge money to cover general budget gaps. No new spinal research has been funded.

“It’s very disturbing that the state … is in the process of phasing out this program when several significant discoveries have been made through the research that we funded,” said Paul Richter of Albany, a member of the spinal research board and a retired State Trooper who was shot while on duty. He is paralyzed from the neck down.

In the past 10 years, the program supported $60 million in spinal research.

“Our project could never have happened without that funding,” Temple said.

You can help the disabled in Haiti