Spinal-cord injuries: The uphill push for a cure 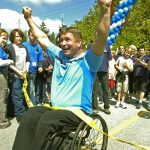 Rick Hansen says we’ll see a breakthrough in spinal cord injuries within 25 years, but it will be hard work — spurred on by innovations such as the Spinal Cord Registry

Twenty-five years ago, Rick Hansen’s Man in Motion team looked up Thermal Drive in Coquitlam and realized they’d made a mistake.

It was almost the end of Hansen’s epic round-the-world journey — within days of his finishing in Vancouver — and they had blithely drawn his route up a hill that from the bottom now seemed too steep, too tough, given the two gruelling years and two months Hansen had already put in.

“It was the last day or so on the tour and we were getting closer to home and one of the team came in with a sheepish expression and said ‘We’ve got a problem. When we set the route we didn’t know about this place called Thermal Drive. We’re going to have to reroute,’” said Hansen.

It takes no time to draw another line on a map and who would have blamed Hansen if, after 40,000 kilometres, he had navigated his way to Vancouver leaving Thermal Drive alone? Probably nobody, except Hansen himself.

“I said it’s been an incredibly difficult challenge for two years so why would we bypass something that could represent just how hard it’s been,” said Hansen.

So Thermal Drive became a metaphor for all the struggles of his journey and he would best it — willed on by the thousands who came to see the attempt.

On May 18, he will be back again in his wheelchair looking up the same hill — a symbol now of the hard slogging that lies ahead in the search for a cure for spinal cord injury.

Hansen believes that a major breakthrough in treatment will come within 25 years. But to get there it’s going to be uphill all the way, he says, which is why the Rick Hansen Foundation has thrown its weight behind the Spinal Cord Registry.

The Vancouver-based registry is the creation of spinal cord researcher and surgeon Dr. Marcel Dvorak, professor and head of the Academic Division of Spine in the department of orthopedics at the University of B.C. “He’s a brilliant researcher who had the courage to step forward and look for solutions and led a group to pilot this registry,” said Hansen.

Dvorak’s colleague and fellow researcher Dr. Brian Kwon is naturally cautious when speaking about a cure.

“It depends how you define it. A lot of people envisage someone having a catastrophic injury who receives treatment which has them springing from a wheelchair. That mystical cure — that’s a long way off,” said Kwon.

“Along the way we are taking incremental steps improving treatment — not the home run yet, but we’re hitting singles. We feel a lot of progress has been made moving clinical treatment incrementally towards a cure. I think it’s reasonable to expect we are going to see therapies that will make life better for patients,” said Kwon.

Hansen points to the spinal injuries suffered by two former Vancouver mayors, Sam Sullivan injured in 1978, and Mike Harcourt, injured in 2002, as examples of treatment progress.

“Mike Harcourt was someone who received best-practice treatment and care right after his injury, which was relatively similar to the injury of Sam Sullivan. Sam was injured years earlier but without that best-practice and treatment. And you see two very different outcomes,” said Hansen.

Sullivan is confined to a wheelchair while Harcourt isn’t.

The registry has been operating for three years, collecting patient and treatment information from 31 medical facilities in nine provinces. Think of spinal cord injuries as one giant puzzle, with dozens of researchers holding certain pieces. The registry allows them to see many other pieces and to work together on solutions.

“Just getting data sharing agreements between those jurisdictions was massive, but now we have engagement of clinicians and researchers across the country which gives us the opportunity to identify best-practices and ways to evaluate novel treatments,” said Kwon.

During the 25th Anniversary celebrations of the Man In Motion Tour, Hansen has signed data sharing agreements with spinal cord researchers in countries such as China, the United States and Israel as the registry expands worldwide.

“We expect that in the next 25 years there will be an explosion of new discoveries that could be translated into clinical trials. To be most effective we need closer to 70 centres around the world working together in the registry as Canada only has about 4,000 spinal cord injuries a year,” said Hansen.

“To be able to aggregate data between different centres is critical in the case of spinal cord injury because each centre only deals with 100 or 200 injuries a year with many of them different. The registry collects data on how paralyzed a patient is, their prognosis and status, what kind of injury they have suffered and how they have been treated.

“So if someone is introducing a clinical trial and they need a mid-thoracic central cord injury in the acute phase at the beginning of the injury then, with the registry, you have multiple sites around the world you can go to find those persons.

“All of a sudden instead of waiting 10 years to collect enough patients to conduct your clinical trial you can do it in two or three and accelerate the time for the discovery to be validated or not.

“That’s why the registry is such a critical tool. It’s the non-sexy work between the laboratory and the clinic that everyone wants but no one wants to do. So we decided we’d do it,” said Hansen.

The registry will be one of the talking points at Interdependence 2012, an international conference on spinal cord injury sponsored by the Rick Hansen Foundation that takes place in Vancouver May 15-17.

Following this, attention will be on Thermal Drive and whether Hansen will get up it again. “Right now the betting’s mixed,” he said.

Hope is a river