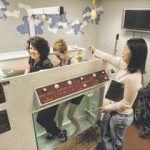 MURFREESBORO — Paralyzed from the waist down since a freak mowing accident in June 2007, Carmen Thompson is taking some groundbreaking steps — even if they’re in water.

Her husband, Terry, a general contractor, has made their Nashville home handicap accessible for his wife, yet she’s determined to stand on her own, largely through experimentation being done at MTSU.

Friday afternoon, Carmen got out of her wheelchair and climbed into a tank filled with 270 gallons of water in the basement of the university’s Alumni Memorial Gym. A treadmill began to move at the bottom of the tank. Thompson’s ankles had two pound weights on them, to pull her feet toward the treadmill. Sandra Stevens, a Ph.D. graduate from MTSU, climbed into the tank as the treadmill moved and helped Carmen’s feet move with it.

Since the first of August, 2011, Carmen has been a part of an underwater treadmill study by MTSU’s Department of Health and Human Performance.

With assistance from Stevens, now an independent researcher at the university, Thompson walks about eight minutes at a time on the underwater treadmill, then takes a three-minute break and repeats the process for about an hour at a time three days a week.

The work is monotonous, but it’s already yielding miraculous results.

“About a month into this, while driving home, I could feel something like an electric current when rubbing my legs,” Carmen Thompson said. “I called Sandy the first time it happened.”

The next striking change came when Thompson was able to stand on her walker, outside of the water-filled tank.

“Being a complete paraplegic, my legs should just give way,” Thompson said.

By Oct. 26, she was able to move her toes during a strength test at the lab.

“My spinal cord was demolished. Neurologically, I shouldn’t be able to move my feet at all,” Thompson said.

Stevens’ work has been under the supervision of Don Morgan, a professor in the Department of Health and Human Performance and director for the Center for Physical Activity and Health in Youth at MTSU. He came to MTSU in 2004 from Arizona State where he was awarded a grant to use the underwater treadmill approach with children with cerebral palsy.

“We had done previous research looking at gait efficiency in children with cerebral palsy,” Morgan said. “It became clear to me that what we needed to do is perhaps train them in some way to improve their endurance as well as their leg strength.”

Morgan remembered seeing an athlete training in an underwater treadmill and thought that might for others with bigger problems. Children with cerebral palsy fatigue earlier when walking, and he hoped the underwater treadmill would improve their endurance and strength. Stevens came to MTSU in 2005 to work on a doctorate in health and human performance and assisted Morgan with the study on children, which ran between 2005-2008 at MTSU.

Results showed that the children who trained in the underwater treadmill had better leg efficiency and strength and that they walked faster on dry land, he said.

Stevens’ doctoral dissertation at MTSU focused on 12 adults with incomplete spinal cord injuries, where some motor or sensory function is preserved below the level of the injury.

“Everybody came three times a week for eight weeks, and the intensity of training progressed throughout their training period,” Stevens said. “Overall, everyone progressed significantly.”

Research showed that each participant who finished the incomplete spinal cord study in 2010 had meaningfully improved motor function, from greater stability during transfers to eliminating the need for a device to help them walk. Participants also reported an improved sense of self-confidence and personal well-being, as well as restored hope for gaining mobility and physical performance.

Two others with complete spinal cord injury are participating in the latest round of research but aren’t as far along as Thompson. The newest participant is Amy Hawkins from Hendersonville, who was paralyzed in April 2006 during a tornado.

The study with Thompson was originally designed to last six months.

“… She has demonstrated enough improvement that she doesn’t want to stop,” Stevens said. “We want to see how long the improvement will continue.”

Thompson has had sensations in her legs that she couldn’t feel before since the underwater treadmill study began.

“She is now able to stand by herself in a walker or at a counter, and she is able to initiate some steps in the water,” Stevens said.

Before, Thompson couldn’t take any weight on her legs or stand.

Friday, during a break in the study, Thompson said her husband once came in the house and saw her standing at the kitchen counter.

“My husband said ‘maybe I should stay inside,'” Thompson said. “I stood for one and one half to two minutes. That’s not anything we ever dreamed we’d be able to do.”

A New Hope for Treating Spinal Cord Injury: 5 Points on...