A new way to banish bedsores 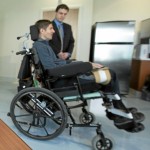 For 26 years, Stewart Midwinter had been paragliding, but last August after a leap from a Rocky Mountain peak west of Calgary, he encountered unusual turbulence that sent him careening into the mountainside.

His paragliding partner thought he was dead, but Mr. Midwinter was safely plucked from the backcountry and taken to a hospital where he has been ever since, wheelchair bound, able to move only one arm from the chest down.

The mechanical engineer was suddenly thrown into a world where he had to learn about spinal cord injuries, and their related conditions, including pressure ulcers, which can eat away at the skin, right down the bone, cause infections, require surgery and potentially kill.

It was a frightening prospect so a few months ago, the 56-year-old Calgary man joined a pilot project testing the use of so-called Smart-e-Pants. The customized undergarments look like bicycle shorts, but they are fitted with a device that painlessly zaps intermittent electrical currents to stimulate the patient’s nerves and muscles, which in turn, effectively mimic the movements of able-bodied people whose tissues receive much-needed oxygen and blood flow.

“I’m very fortunate to have been injured in a time when this project is starting up and to be able to potentially benefit from it,” said Mr. Midwinter, who has avoided suffering from pressure ulcers since his accident.

Pressure ulcers, known colloquially as bedsores, cost the Canadian health care system an estimated $3.5-billion a year, according to experts. And, about 30 per cent of patients with spinal cord injuries who are confined to a wheelchair or those who are bedridden due to other ailments will be affected by pressure ulcers.

Continuous unrelieved pressure on the skin reduces blood flow to an area and the tissue can die, resulting in an ulcer. Additional factors – such as humidity, friction and little body fat – can increase the chances of developing these sores.

Even patients who receive good medical care are at risk.

Actor Christopher Reeve, who suffered a spinal cord injury during a horseback riding accident, died due to complications from pressure ulcers.

In 2010, there were an estimated 85,556 people living in Canada with spinal cord injuries, about half caused by traumatic injuries and the rest due to illnesses such as cancer and ALS, according to the Rick Hansen Institute. Each year, there is an average of 4,259 new cases of spinal cord injury.

Canadian studies have also shown that pressure ulcers cost between $15,000 and $72,000 to treat; the estimated cost of a pair of Smart-e-Pants is perhaps a few hundred dollars.

“The size of the problem is fairly enormous,” said Sean Dukelow, a neuroscientist at the University of Calgary, “We spend a lot of money in Canada trying to fix the problem after it happens.”

Instead, Dr. Dukelow is part of a group of Canadian researchers from the University of Calgary and the University of Alberta, collectively known as Project SMART team, who are trying to prevent the problem from occurring at all.

Vivian Mushahwar, a biomedical engineer at the University of Alberta, is credited with pioneering the work after recognizing the need for the immobile to “fidget” and figuring out a way to make that happen. Preliminary work began about seven years ago, including in the lab with animal subjects. In 20009, the research attracted $5-million from the provincial government and Alberta Innovates Health Solutions. The first phase of clinical study with 20 patients in Edmonton is now complete, while testing has begun with five patients in Calgary.

The Smart-e-Pants sends an electrical current for 10 seconds every 10 minutes. So far, researchers have determined that the mechanism is safe – perhaps just 1 per cent of patients will have an allergic reaction to the electrodes – and hypoallergenic. They have also learned that nursing staff find the garment simple to apply. Now, scientists are setting out to determine if it actually works. So far, none of the patients have reported suffering bedsores.

Mr. Midwinter, who has been wearing the Smart-e-Pants every day except when he sleeps, said he can’t feel the electrical pulses, but he knows they are working. Being a scientific guinea pig, he added, has been good for his body as well as his soul.

“Dealing with a spinal cord injury is very devastating so to be able to do something productive and participate in something like this is a big boost to my morale,” Mr. Midwinter said.