Smart-e-Pants takes the pressure off 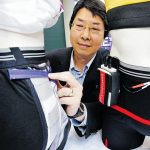 Gem Hebert is the perfect candidate for Smart-e-Pants: she likes when her bum jiggles.

She was even willing to wear the electronic undies in public to show the importance of their continued development to prevent potentially fatal pressure sores for people in wheelchairs like herself.

“You get little tingly feelings,” said Hebert, who, as a former patient at the Glenrose Rehabilitation Hospital, tried two versions of Smart-e-Pants that have electrodes built in to contract the buttocks every 10 minutes for 10 seconds to stimulate circulation.

“You go around and you’re smiling for that 10 seconds of thrill.”

That 10 thrilling seconds could pre-vent pressure ulcers forming deep inside the muscle when a person with a spinal cord injury, multiple sclerosis or other mobility issues stays in one position for a long time without shifting naturally to keep the blood flow steady.

Most people naturally fidget every six to nine minutes, relieving stiffness and pressure without even realizing they’re doing so.

For people who are paralyzed and can’t roll over in their beds or stand on their feet, pres-sure builds up near the bones, stretching, breaking down and causing inflammation in the inner muscle that slowly works its way to the surface unnoticed until it causes blisters and huge oozing craters in the skin that are difficult to heal.

Patients such as these have an 80-per-cent or higher chance of developing such a sore during their lifetime. And if it happens once, it’s much more likely to happen again, increasing risk of infection, blood poisoning, then death. That’s what happened with Superman actor Christopher Reeve, who died in 2004 after a pressure ulcer infection.

“We are really not talking about minor scratches and bruises on the skin,” said University of Alberta cell biology professor Vivian Mushahwar, who has led the Smart-e-Pants research team for five years with $5 million in funding from Alberta Innovates Health Solutions.

Mushahwar knows a woman who has lived with such an ulcer for more than two years. One pressure ulcer can cost up to $72,000 to treat, with an estimated health-care burden of $3.5 billion each year in Canada. Some-times, the holes on the surface of the skin are so wide and deep, surgeons have to take pieces of muscles from elsewhere to fill in the void. For patients such as this, Mushahwar has worked with a team of physicians, physiotherapists, nurses, scientists and engineers to create Smart-e-Pants.

Made out of a wicking, anti-bacterial material common in gym wear, the briefs are meant to be worn like underwear, directly on a person’s behind. Two slippery flaps on the back side open to reveal a mesh layer, over which four disposable electrodes are placed. Wires loop through the belt of the underpants to a portable battery-operated stimulator that sends pulses to contract the muscles.

So far, 25 people including Hebert have worn the tighty whities during one-month trials at the Glenrose, the Allen Gray Continuing Care Centre in Edmonton and Calgary’s Foothills Medical Centre. The undergarment was deemed safe, and the research team is looking for funding for clinical trials to test the Smart-e-Pants on a larger group. Such trials would likely take five years or longer before a company could consider marketing it for actual use.

Mushahwar said preliminary data suggests wearing the underwear prevents pressure ulcers altogether or reduces the risk of developing them by 50 per cent.

Dr. Ming Chan, a rehabilitation medicine specialist at the Glenrose, estimates the underwear itself, with flat seams and a slippery back end to prevent the sticky electrodes from moving or rolling up, would cost between $50 and $75.

The attached equipment would push the price up to $2,000. A pair of electrodes, for instance, costs about $5 a day. Yet Chan said that needs to be compared to the cost of hiring nurses to turn patients over every two hours or more frequently, depending on the patient’s disability.

Currently, patients are also taught to lean forward or use their arms to lift up their bums to relieve pressure. Special mattresses and wheelchair cushions also help.

“None of these interventions give you a muscle contraction, and it seems from our studies that is a necessary ingredient,” Mushahwar said.

And the patients like the wiggles, said Glen Isaacson, a licensed prosthetic and orthotic technician at Glenrose Hospital whose person-al job was to research underwear from Zellers to Lululemon and modify the design.

He visited department stores with his wife, even purchased pink material and elastic from a fabric store to make sure the final product could be easily washed, opened at the front for catheterization, but still looked like regular form-fitting briefs.

“I’ve become an expert in underwear,” he said.