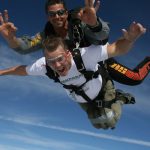 They are the rabbits to chase in any race.

On Sunday, more than a dozen members of the Spinal Cord Injury Support Group will compete in Fort Lauderdale’s A1A Marathon in the handcrank wheelchair division.

“We want to reach people, especially when they’re newly injured, to show them that life isn’t over,” said Rob Bereolos, president of the Sunrise support group.

We highlight four of the 200 members who found healing and hope during their monthly meetings at HealthSouth Sunrise.

‘It opened my eyes’

Sherrod Nelson, 43, fell from the attic of his Pembroke Pines home while installing a security camera.

The father of four has been paralyzed from the waist down since Jan. 15, 2008.

“Almost all men contemplate suicide at around the two-year mark,” Nelson said. “The second year, most people realize, ‘This is it, I’m in the chair. I’m going to be in a chair the rest of my life.'”

Concerned he might slip into depression, his wife found the support group and insisted he go.

“Ever since then, it’s been different for me,” Nelson said. “It opened my eyes that there are other people going through the same thing I am. We can’t change it, so we keep moving forward.”

‘I wanted to be happy’

Chris Holcomb, 41, thought his life was over after a car crash in August 2004 made him quadriplegic.

Then a friend talked him into trying wheelchair rugby.

“My sister made me go,” he said. “And it changed my life. I saw these people were happy. And I wanted to be happy too.”

Holcomb, of West Palm Beach, is now a coach with Achilles International, a nonprofit that trains the disabled for athletic events nationwide.

A marathon veteran, he will tackle his 10th on Sunday.

He shot her in the back and ran over her with his SUV, then dragged her to the bushes and left her to die.

On Sunday, she will race in the A1A Marathon — her ninth.

‘Some have it worse’

Reinaldo Maiz, 22, remembers nothing of his motorcycle crash three years ago, just two blocks from his Cooper City home.

Paralyzed from the waist down, he was forced to give up his job as a Broward County firefighter.

“When I got home, I was a little down,” he said. “Then I realized, at least I can move my hands. Some people have it worse than me.”

He is now studying nuclear medicine at Broward College. “I still want to help people,” he said. “And if I’m not a firefighter, maybe I can help people in a different way.”

The Doctors Said He’d Never Walk. So His Parents Took Him...