From accident to rehab to fatherhood (Disability Dads series) 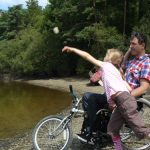 Tim Rushby-Smith became paralysed and a parent at the same time. Six years later, he writes about his life as a wheelchair-using dad of two.

It is impossible to separate the birth of our daughter from my spinal cord injury six years ago.

When I fell from a tree and broke my back, my wife Penny was five months pregnant. The imminent arrival of our first child was an ever-present focus during my rehabilitation at Stoke Mandeville. As I struggled to come to terms with life as a wheelchair user and the other challenges that go with being paralysed from the waist down, I was aware that the clock was ticking.

It provided a powerful motivator that underpinned every physio session and gave me the drive to overcome my frustrations. I did well and was discharged from the spinal unit a week before Rosalie was born.

An enduring memory of my first month of parenthood is of reclining on the sofa watching the Ashes series cricket on television, a sleeping baby sprawled on my chest. The most comfortable and safe position for both of us at the time.

But while not being able to return to employment (I was a landscape gardener and tree surgeon) allowed me to spend hours holding the baby, the frustrations of my situation were profound and upsetting.

Many of my mental images of fatherhood were based around physical activities such as having my child sitting on my shoulders. Instead I had real anxiety the first time I was left home alone with the baby. An anxiety that was not eased when I fell out of my wheelchair. After the initial surge of panic, I heard Rosalie gurgling happily from the sofa, and realised that she was fine. All I had to do was get myself back into my chair in my own time.

As with many experiences of parenthood, one has to go through such trials to realise that the fear is often worse than the reality. As Rosalie has grown, we have learned together. She has a good grasp of what I can and can’t do, and even accepts that I may occasionally run over her feet.

Six years later, I was working again and we had just got to a point where things were getting a little easier, when child number two came along…

Felix was born in April of last year and I found I had fewer anxieties. This was known territory. I’d been there, I had the t-shirt (the one that looks like it’s been tie-dyed with mashed banana and unidentified gloop that’s always bright orange).

But things are different this time around. There are undoubtedly compatibility issues that come when a living space is shared between a wheelchair user, a crawling baby and a six-year-old.

• Many of Rosalie’s toys now contain detachable components that are a perfect size for her baby brother to swallow.
• The narrow margin where I can put stuff within my reach but out of his has become narrower still, as Felix gleefully pulls out the contents of drawers and works rice crackers into the DVD player.
• If Felix crawls under my wheelchair while I’m at my desk, he can effectively pin me in place until he gets bored or someone comes to the rescue.

These are minor issues; variations on the adjustments that most families go through with the arrival of a second child. But I am gradually realising that most of the serious frustrations I deal with now, are because of the changes in my expectations over the past six years. When Rosalie was born, I considered making a cup of tea and transporting it to another room to be something of an achievement. These days, I do most of the cooking in our house.

The other morning I was in something of a daze, making porridge to ward off the chill of a snowy day. As I stirred the pan and yawned, a tiny hand reached out from my lap and grabbed the cooker hob. Felix’s fingers made contact for just a split second and I immediately thrust the hand under cold water. Thankfully, he only suffered a tiny blister on one finger, but the whole experience was upsetting.

I am unable to feel when something is on my lap. On reflection, I can’t say whether I had momentarily forgotten that Felix was sitting on me or if I had under-estimated his reach.

Such instances are sobering but thankfully rare. Most of the time, while I am often working on the outer margins of what I can achieve, be it lifting a six year old with one arm or wrestling a giggling and wriggling toddler into a babygrow, the contrasts in my experience of parenthood this time around compared with six years ago are helping me to realise that perhaps I am closer to the father I imagined I would be before my accident.