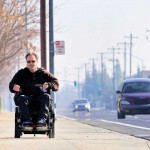 Every move that Brad Peters makes is thought out.

The zipper on his sweatshirt includes a small piece of thin tied rope so that his fingers can fit through the loop and pull down if he has to.

His cell phone hangs from the side of his motorized wheelchair with the same rigging so he’s able to easily grasp it and flip it open in case he receives a phone call or has to make one – the latter of which can be a difficult task for a quadriplegic that has spent more than three decades finding ways to live with his disabilities.

But Peters never complains. He never blames the rest of the world for his lot in life. He doesn’t bring the rest of the people around him down, and it’s really difficult to see him get angry.

Unless you bring up Scott Johnson.

Any mention of the Carmichael attorney that has filed thousands of lawsuits centered on the Americans with Disabilities Act and how non-compliance has violated his civil rights is enough to get Peters’ blood boiling. And his take on the entire issue is one that you wouldn’t necessarily expect from somebody that requires specialized access and encounters mobility issues regularly. But the way that Peters sees it, there are always better ways to find resolutions than to simply turn to the courts and file a lawsuit.

As Peters rounds the southwestern corner of Main Street and Yosemite Avenue he has to pass between a pair of posts that leaves him with just inches on each side of his wheel chair. It can be dangerously unsafe in certain circumstances, and requires him to slow his turbo-charged wheelchair down to a snail’s pace in order to round the tight corner.

But it isn’t until he gets up to the door of Century Furniture that he truly encounters difficulty.

The door to Sam Guedoir’s store isn’t just too heavy, but the handles are too close to the glass for him to put his hand – which has barely any grip – behind it for leverage. Typically he hooks his entire hand through in order to use the wheelchair as a pulley and then swivels around to back in, but this time it took him nearly 30 seconds to figure out how he was going to navigate the challenge that lied before him.

Welcome to life as a quadriplegic facing just one of life’s daily challenges.

Guedoir – who is currently fighting his lawsuit against Johnson and will be back in court later this year – told Peters that he had already relaxed the tension on the doors so he thought that everything was supposed to be okay. But, in no uncertain terms, the man that has become one of the champions of helping Manteca’s businesses become compliant with the law to help prevent them from ending up on the wrong side of a settlement payday told him that he knew right away that they were too heavy, and something as simple as a $5 fish scale from Bass Pro Shops would help him gauge exactly where they needed to be.

“They just hook on the door handle and you pull it and it tells you how many pounds,” he told Guedoir – who, up and until this point was completely Gung Ho about fighting his case against Johnson and against making any changes to the business outside of loosening the tension on the door. “Right now this isn’t spec. It isn’t up to compliance. And this is one of the first things that somebody’s going to see.”

The scene is almost surreal – the guy in the wheelchair that’s struggling to get into the business isn’t looking for ways to maximize the experience for profit, but how to help the business owner to make sure that he doesn’t get hit again by another “unscrupulous individual” as Peters described them looking to make a quick buck on the backs of those who face adversity every single day of their lives.

He talks about how wide the aisles are to navigate through the furniture. He tells Guedoir that outside appearances like door handles and properly striped and signed handicapped stalls will more often than not provide reason enough for somebody not to come inside and start poking around. He talks about specs and codes and sections and government jargon with the specificity of a civil engineer – something that is all relatively new to him but expertly disseminated to somebody that use the information.

In this sense, Peters has become somewhat of Johnson’s Equalizer – his foe on the opposite end helping businesses pick up whatever pieces are left after the tornado blows through town and coaching others to ensure that they aren’t hit when the next one touches down.

When word began to spread that Johnson had arrived and started doling out lawsuits – as many as 36 in Manteca alone – Peters became incensed and started to become radicalized against the idea of somebody using the Americans with Disabilities Act, which was enacted to help people like him, against his own community.

The problem, however, was that nobody knew who Scott Johnson was. So when Peters started appearing at businesses with a clipboard in his lap to gather signatures for a petition drive against the Carmichael attorney he was met with skepticism and even hostility. Some people closed their doors. Some locked their doors. Almost all required a detailed explanation of why this man in a wheelchair with a stack of papers was suddenly in front of their businesses asking to speak to them.

But things mellowed out. Peters was eventually able to build enough of a rapport that he was taken as a serious advocate for Manteca businesses and himself and visiting places like Century Furniture wasn’t quite so taboo anymore – even if his bold, from-the-hip delivery could catch people off-guard at first.

“If you take care of these things first then you don’t give somebody a reason to come inside and poke around,” Peters said. “That’s the idea behind all of this. I’ve never – never – had an issue where a Manteca business was unable or unwilling to work with me in all of the 31 years that I’ve been in this wheelchair. And I don’t think that’s going to change anytime soon for anybody.

“So we shouldn’t let somebody come in and change that.”