Jay Ruckelshaus working toward ‘a whole new life’ after accident 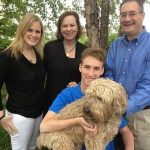 John and Mary Ruckelshaus know the feeling of powerlessness.

First, their oldest son, Drew, and daughter, Maggie — diagnosed with congenital glaucoma as babies — went through 20 surgeries each to prevent blindness.

Then, at age 9, Drew was diagnosed with leukemia and suffered through six months of chemotherapy and five years of medication.

But now the family faces its longest, most difficult battle.

It involves their youngest son, 19-year-old Jay, a lanky 6-foot-5 scholar-athlete who was blessed with abundant talents.

He was co-valedictorian of the 2011 Cathedral High School senior class. He missed one question on his SAT exam. Harvard, Yale and Duke universities pursued him. Indiana University offered him the prestigious full-ride Wells Scholarship.

But one night of swimming with friends, one decision on a Geist Reservoir dock, altered his life — and his family’s — forever.

He dived off a dock assuming the water was far deeper than it was. Jay’s head hit the bottom. His spinal cord bent badly and snapped back. Bones in his neck were crushed. There was swelling and bruising around the spinal cord. Friends pulled him out and called an ambulance.

Jay was paralyzed from the midchest down.

Now the young man who ran cross-country, swam for Cathedral and was on a rowing team needs three therapists to move his legs during 90-minute treadmill sessions.

He loved to play the piano. Now, he can’t move his fingers.

He was service-oriented, leading his school’s Habitat for Humanity chapter. Now he focuses solely on his recovery.

“Rethinking a whole new life is the hardest part,” said Jay, who is rehabilitating in Atlanta.

But he hasn’t lost what’s most important to him: his intellect.

Last summer, the Ruckelshauses thought they’d be moving Jay into a residence hall at Duke University in North Carolina, where he has a full scholarship. Instead, in August, they took Jay to Shepherd Center, a nationally known center for treating spinal cord injuries.

Mary, a Realtor, stopped working and moved with Jay into an apartment. They have returned home once, for two weeks at Christmas. John, a consultant for the Baker & Daniels law firm, stays here to work but visits Atlanta often.

Drew, who is earning his graduate degree in athletic training at the University of Idaho, has been Jay’s “cheerleader,” advising Jay about his training, Mary said. Maggie, a 2011 Butler University graduate, has been a great distraction, talking to Jay about everything nonmedical.

The family has endured hours of rehabilitation and wearisome hospital stays when Jay has had fevers, high blood pressure, kidney stones and headaches.

Yet they are hopeful and grateful.

“No matter how difficult you think you have it, somebody else is much worse off than you,” said John, a former state representative and deputy commissioner of workforce development in Gov. Mitch Daniels’ administration.

After a particularly tough hospital stay recently, Mary said, “We do have our pity parties, but nothing is gained from that. We are so ultra-focused on recovery now. We have to keep his body strong and healthy for when medical science and research catches up with us.”

With each new month, the family expects to see more progress. Mary says that’s what keeps her going.

Already, there have been breakthroughs.

A big one came in September when Jay was removed from a ventilator. Now he breathes on his own but not deeply. Some movement and feeling have returned.

“At first, the only thing I could do was shrug my shoulders and move my head,” Jay said. “Now I have limited use of my arms. I have functional biceps, a key muscle, and decent deltoids in my upper shoulders. My left arm is much weaker, though. And I can’t move my hands or grip anything.”

He spends seven hours in the gym each day, more than half of that working with his mom. He has aqua-therapy twice a week.
Looking forward

Mary never thought Jay would be involved in this type of accident. “He is not a risk-taker and was always thinking about the consequences of what he was doing,” she said.

Jay knew from the beginning he might be paralyzed, she said. “He was very calm, and we were very calm. But he was obviously scared out of his mind.”

The day after the accident, Jay underwent surgery to realign his spinal cord and fuse his damaged vertebrae. He stayed at Methodist Hospital for a month. Then John and Mary decided the Shepherd Center was the best place for him to receive rehabilitation.

“Jay has always outworked and outsmarted everything in his life,” she said. “That has sort of been his mantra through this: ‘I want to outsmart and outwork this.’ ”

But recovery from spinal cord injuries, Mary recognizes, is unpredictable, regardless of hard work.

From the start, Jay said, family and friends have been important. They’ve sustained and encouraged him. The family has grown even closer.

The public safety community also is coming to the family’s aid.

Police and firefighters organizations, some of which John’s father, attorney John C. “Jack” Ruckelshaus, represented for more than four decades, are hosting a fundraiser today at the Indianapolis Fraternal Order of Police Hall to help with expenses.

“All of us, as parents and grandparents, unfortunately could see ourselves in that situation,” said Danny Overley, a retired Indianapolis deputy police chief. “You can plan for college and plan for almost anything else, but you can’t plan for this.”

The long-term financial costs are great. Although the family is fortunate to have good insurance, John said, they are about to exhaust covered therapy costs. Jay will need care — probably 24 hours a day — wherever he is.

Jay wants to start classes at Duke in August. Mary plans to stay with him for a while. Then he wants to make it with the help of attendants and Duke’s adaptive services.

“I read a lot at night. I go crazy if I don’t have something to think about. I use an iPad, and it allows me to read the things I want to read.”

He had intended to study international business, but now he’s uncertain of his major. Jay, who is fluent in French, finds politics and economics appealing.

Statistics show 70 percent of quadriplegics are unemployed, Mary said. “Jay will not be one of those. He’ll find something that will use his mind.”

For now, he’s focused on the day-to-day tasks ahead of him.

“He thinks there is still more recovery to come,” Mary said. “He needs to be as strong and independent as his body will allow and learn to be an advocate for himself.”

Jay knows his life won’t be as he imagined. But, he said, “I try to look to the future and be optimistic.”

His dad has faith in his son.

“We’re within four to five years of major breakthroughs in spinal cord injuries,” John said. “There’s no question in my mind, because of his age, his work ethic and intelligence, he’ll be in the best position to take advantage of what technology can offer in the future.

“I think he’ll have a great life.”

From father to quadriplegic: How rehab gave me my life back