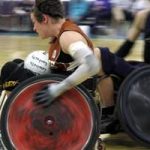 Emily Shryock got involved in the sport of quad rugby to stay active and competitive despite using a wheelchair. What she gained was independence.

“When I started playing, there was a great feeling of comradery. I saw my teammates and thought: If they can do it, I can do it,” said Shryock, 25, an Indiana native who now lives in Austin, Texas. “It’s given me a lot more confidence. … Confidence has translated into independence.”

Shryock, who was disabled by neurological Lyme disease, plays for the Texas Stampede, one of 16 teams from across the United States participating in the 2012 U.S. Quad Rugby National Championship Tournament at the Kentucky International Convention Center on Saturday. Organizers said this is the sixth year that the 24-year-old, three-day national event has been held in Louisville.

“These are the top 16 teams in the nation,” said Jill Farmer, manager of recreation therapy and adaptive sports at Frazier Rehab Institute and one of the tournament directors. “These guys need to train year-round. It never stops.”

The sport, also known as wheelchair rugby, has roots in wheelchair basketball and ice hockey and was developed by three Canadians from Winnipeg, Manitoba. Farmer described the sport as a combination of hockey and soccer, in which four players on each team compete on a floor similar to a basketball court in specially designed wheelchairs — with separate “offensive” and “defensive” chairs. The sport was featured in the well-known 2005 documentary “Murderball.”

Saturday, wheelchairs clanged together as players ran into each other as they raced across the court, trying to score goals with a ball and stop competitors from doing so.

“It’s a full-contact sport. It really is,” Farmer said. “It’s about these guys taking back their lives. You can be born with an injury or sustain an injury, and there’s so much out there for you.”

Shryock said she had always been an active, competitive person, and immediately became interested in the sport when she attended a tournament in Indianapolis. It’s now her fifth season in quad rugby, and she also works in the disability services office at the University of Texas and is studying for a master’s degree in social work.

Teammate Mark Zupan, who has been involved in the sport since 1996 and was a central figure in the documentary film, said he played soccer in college and was looking for the same sort of stimulation in his life after he got hurt. He became quadriplegic after being thrown out of the back of a pickup truck and spending 14 hours in a canal before being rescued.

Zupan, 36, a civil engineer, said the training for the sport is rigorous, but worth all the effort. Zupan said he is one of 19 members of a squad that will be whittled to 12 and compete in the London 2012 Paralympic Games.

“It’s fun,” he said of the sport. “It’s afforded me so many opportunities. I’ve seen the world.”

Ernest Chun, 30, of the Phoenix Fusion team, said this is his fifth year in quad rugby. Before suffering a spinal cord injury while surfing, Chun was an elite tennis player, and he said quad rugby gives him the chance to stay competitive.

“Sports help you rehab quicker,” Chun said. “You learn tricks from the other people, how to manage your life. You get stronger.”

Farmer said newly hurt patients from Frazier sometimes come over to watch the games — and get inspired.

“They’re just in awe of the ability of these individuals and what they can do,” she said. “Nothing can hold them back.”

Written by
Laura Ungar
The Courier-Journal

The Games Come to Scotland This Summer

Budding web designer an inspiration to others