Quadriplegic triumphs over tragedy to help others 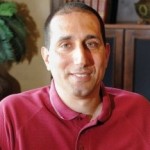 Paul Jacobson, 45, will receive the 2009 “Victories of Spirit” Award from the Sharp Healthcare Foundation on Friday, June 5.

“If you’re driving along the back area near Costco in Poway, some of the stop signs blink. Have you ever noticed that? Well they blink because of me,” he said.

Paul Jacobson was referring to the solar-powered, enhanced visibility stop signs that were installed after an accident that radically changed his life five years ago.

It was a November afternoon in 2003. He had left work early to go to the dentist.

“Sometimes the dentist isn’t always so bad,” he said in retrospect.

He was driving his Acura TL sedan when “a girl who was lost drove through a stop sign and hit me on the passenger side and knocked me off the road into a ditch. People told me later they had to rip the roof off my car to get me out. I don’t remember any of it.”

In fact, the last memory he had was of him “walking” to his car prior to the collision.

He was 40 at the time and had a good job as an Internet marketer and Web site manager for Gateway computers in Poway. He also taught Internet Marketing at UCSD.

He owned a condo and he was an avid sports guy spending most of his free time playing in four softball leagues, four nights a week, plus in a basketball league and a tennis league.

“So, every day, every night, I did something athletic,” he recalled.

Following the accident, he woke up in Intensive Care at Scripps La Jolla with a C5-C6 spinal cord injury. His spinal cord had been severed between the C5 and C6 vertebrae in his neck. He was paralyzed from mid-chest down. He had no use of his legs, and, although he could move his arms with difficulty, both hands were partially paralyzed. He was pronounced a quadriplegic.

After a month at Scripps, he was transferred to Sharp Memorial Hospital’s rehabilitation center, where he was treated as an inpatient for three months.

What really helped, he said, were the people who visited him while he was hospitalized, not only friends, but former patients who had suffered similar spinal cord injuries and who offered him encouragement and hope.

“They’d say, ‘Things aren’t always going to be this way, Paul. One day, you’ll even to able to drive again.’ And, I thought, ‘What are you crazy? I can hardly move, much less drive,’” said Jacobson. “And, of course, now I’m driving.”

He has put 47,000 miles on his handicap-customized Ford E- 350 van during the past three years, including a couple of trips to Vegas to try his luck at the Black Jack tables and an adaptive ski trip to Colorado.

Being able to drive, he said, has given him a freedom and independence that he cherishes.

“If you were to take away the van, that’s the one thing that would really bug me,” he said. “I like to get out there.”

Today, the 45-year-old Jacobson conducts his busy life from a power chair and his van, dedicating much of his time to mentoring and supporting newly-injured spinal cord patients.

In recognition of his inspirational overcoming of a catastrophic injury and giving back to the community, on Friday, June 5, at 6 p.m., Jacobson will be among four honorees who will receive 2009 “Victories of Spirit” Awards from the Sharp HealthCare Foundation at the Hilton San Diego Bayfront.

We interviewed Jacobson at his three-bedroom, one level home where he lives with his companion dog, Gigi, a 140-pound, tan-colored Great Dane.

“She’s not a service dog,” Jacobson said. “I’m her service person basically. I walk her and stare at her. People love her.”

And she loves hanging out, sunning herself on the grass in Jacobson’s backyard, and trotting beside him tethered to his motorized wheelchair on their 8-mile-an-hour “walks” around the hilly Santaluz gated golf community.

If they ever make a movie about Jacobson, Adam Sandler would be a natural. He and Jacobson share the same Jewish East Coast heritage, lanky good looks, upbeat energy, and a droll sense of humor.

Jacobson was born in New Haven, Connecticut. He was the middle child in a family of three children. His dad owned and operated electrical contracting business that was started in the 1930s by Paul’s grandfather.

He earned a B.S. in marketing management from University of Maryland in 1987; an MBA from University of Bridgeport in 1990, and launched his Internet marketing career with companies in Connecticut before being recruited in 1997 by Road Runner Sports, the running shoes and apparel company headquartered in San Diego.

Recounting his injury experience, he said; “You get comfortable in the hospital. If you push a button, a nurse comes running,” he said. Afterwards, his life became more challenging.

“I went home to a condo where I was living prior to my injury. And a condo isn’t really efficient for somebody in a wheelchair, especially when it has three levels. So, consequently, I lived in my living room for a year and a half, with no access to a bathroom, a shower, a sink, or a refrigerator. I had to do bed-baths, people had to bring me food. At that time, I didn’t have enough strength to eat the way I do now. People had to feed me. I had to retrain my body to do everything.

“It’s depressing when I think about it, looking back, but it wasn’t depressing at the time. Much the same way, I’m not depressed now, but, if I somehow were better, I think a year from now I’d look back and think, ‘How the hell did I deal with that?’

And, he said, if someone had predicted before he was injured: ‘Paul, this is how you are going to be, a C5 – C6 injury, and you’re not going to be able to do this, this and this; and this is the limited function you’re going to have, I would have said, ‘Okay, check please….’

“But the human spirit is a lot stronger than I would have thought,” he said. “I’m not a religious or spiritual person. No. I’m a happy person. Really,” he insists. “That’s the way I was prior to my injury and that’s kind of the only way I know to be. I don’t mean to imply I didn’t have my moments of depression or unhappiness or disappointment, I definitely had many of those, but they were fleeting. They would come and in 30 minutes they would be gone. Unfortunately, a lot of people have those moments that last for months.”

As a result of the accident, he received a financial settlement, sold his three-level condo and purchased a more wheelchair-friendly, one-level house in Santaluz in 2005.

A caregiver assists him for an hour and a half each morning and a half hour in the evening. He eats out mostly, he said, but he has a great kitchen and friends like to come over and cook.

“They want to come over and cook and stay here, which is fine with me,” he laughed. “I have two extra bedrooms.”

He works out twice a week at the Awakenings Health Institute, in Solana Beach, a gym that specializes in exercise regimens for persons with spinal cord injuries, and once a week at San Diego State’s disabilities gym.

Also, on a regular basis these days, he can be found at Sharp’s rehab center, mentoring and supporting newly-injured patients. Since his discharge from Sharp’s inpatient center, Jacobson has served on the boards of two foundations to aid spinal cord injured patients. He is currently on the board of the HeadNorth Foundation.

“HeadNorth is an organization that helps folks here in San Diego County by giving grants to individuals with spinal cord injuries,” he said. “Two kinds of grants: one, to someone who has just been injured, we’ll give the a thousand dollars to help defray an initials costs that always come up. And when they return home, we’ll give them grants for equipment, voice-activated software, or therapies, whatever they need.”

He’s also a member of Big Brothers Big Sisters. And, most recently, he joined a nationwide program called Think First in which he will be visiting area elementary and high schools to share his story and to talk about “decision making and how our lives can change all of a sudden.”

Is there a chance that his injury can be cured?

“Yes, there is,” he said. “There are folks working on it. However, there are not enough resources in this country dedicated to it to effectively have a cure for it, in my opinion, within the next 10 years; maybe after that if governmental restrictions ease up.

“But, that being said, for those who are injured already, even if there is a cure, the chance for functional gain is pretty limited ….after being in a wheelchair for so long.”

Patients, suffering spinal cord injuries in future, however, would undoubtedly benefit, he said.

“I don’t have any designs or hope that I’m going to walk again, but if it happens, that’s great, but I don’t live day to day hoping that’s going to happen.”

Arthur Lightbourn writes for the Rancho Santa Fe Review, where the article was originally published.

No cure for spine injuries – but hope