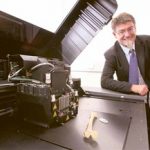 Researchers hope a “cure” for serious disabilities could soon be found in a Wollongong laboratory.

A $4.7 million research program launched yesterday could produce a major breakthrough in the treatment of muscle, nerve or spinal cord damage, according to Professor Gordon Wallace.

The program will be based at the Australian Research Council Centre of Excellence for Electromaterials Science at the University of Wollongong’s Innovation Campus in Fairy Meadow.

An elite team of international researchers and students has been assembled to develop tiny implants with the capacity to trigger the regrowth of damaged nerves and muscles.

Trials on rats and mice will begin later this year and if it proves successful, the implications could be enormous.

“I think all of us involved in this know the opportunity we’ve been given comes with the sense of responsibility to deliver to the people who need these advances,” Prof Wallace said.

“The implications are huge for people suffering nerve damage, which is usually a result of trauma or an accident.

“It’s an exciting and challenging area but we understand we have to do things in the most effective and quickest time possible.”

Prof Wallace said a breakthrough could come before the end of the decade.

“It depends very much on the outcome of our animal studies but our target is within a handful of years rather than decades,” he said.

“The way the materials research for bionics is set up now, particularly here in Wollongong, is that we have a very rapid turnaround time in terms of designing and realising the next generation of bionic materials.”

Researchers will work with UOW’s existing bionics team as well as St Vincent’s Hospital in Melbourne.