The spinal cord – The brain and body connector 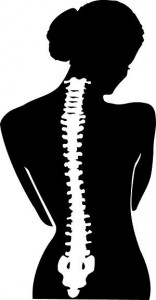 The spinal cord is the all-important switchbox that connects the brain with the body. It’s like a big bundle of wires entering a telephone company’s central office. All the nerves from parts of the body below the neck run to the spinal cord, which runs down the center of the backbone.

Three types of nerves run through the spinal cord. Motor nerves send commands from the brain to the body’s muscles. Sensory nerves take the reverse route, carrying information about pain, touch, heat, cold and related information from the body to the brain. The third kind comprises the Autonomic Nervous System, which controls involuntary internal movements such as the rate of heartbeat and movement in the digestive tract, and sexual function.

The spinal cord is protected by its location inside the spine’s Vertebrae. There are 33 bones in the vertebrae, most of which have an opening in the middle through which the spinal cord passes. In between each of these vertebra is a shock-absorbing structure called a disk that allows for motion. In addition, three layers of tough connective tissue called meninges are wrapped around the spinal cord, as well as the brain. Finally, the spinal cord is bathed in spinal fluid, which provides more cushioning.

Despite these protections, spinal injuries frequently occur in traumatic accidents such as automobile collisions, and sometimes in contact sports.

Just as calls can’t get through when phone lines are severed, nerve impulses to and from the brain can’t get through when the spinal cord is severed or extensively damaged. The disruption extends from the point of injury downward, so an injury that affects nerves running to the arms will also affect nerves running to the legs. In other words, the closer the injury to the brain, the more extensive the damage to body function.

It’s estimated that 40 Americans per 1,000 suffer spinal cord injuries each year, or about 11,000 annually, according to the National Spinal Cord Injury Statistical Center. Younger adults are the most common victims. The average age of injury is about 38 years. Nearly 80 percent of the injuries occur in males. Just under half of the injuries are caused by motor vehicle accidents. Falls cause about 23 percent of the injuries, violence about 14 percent, sports injuries nearly 9 percent, and the rest are due to other or unknown causes.

Nearly 90 of those who survive injury are sent back to their homes or another private residence, presumably those with the least severe injuries. A little more than 5 percent are taken from the hospital to nursing homes. The rest wind up in hospitals, group care or other facilities.

Rats may be the spinal cord patient’s best friend. Extensive work has been done with the rodents in repairing spinal cord injuries. Here’s a sample:

A study released Nov.12, 2003, found that much damage in rat spinal cords is caused after injury from chemicals released by dying nerve cells. This can take place over days or weeks. The lead author was Randy Christensen, a researcher at Ohio State University. The study was presented in New Orleans at the annual meeting of the Society for Neuroscience.

In July 2004, researchers from UC San Diego reported that they had regenerated nerve cells in the spinal cords of rats by treating them with a chemical called cyclic AMP. The study was published in the Journal of Neurosciences.

A number of studies have been conducted in rats with stem cells, both “adult” and embryonic. In November 2000, a team led by neurologist Douglas Kerr at Johns Hopkins School of Medicine reported that it restored some movement to recently paralyzed rats and mice by injecting neural stem cells into spinal fluid. The study was released at the Society for Neuroscience meeting in New Orleans.

In June of this year, another team led by Kerr reported it had created new circuits of motor neurons by injecting mouse embryonic stem cells into rats whose spinal cords had been damaged by a virus. Rats who received the treatment recovered partial movement. The method looks promising for repairing damage in patients from such degenerative diseases as Lou Gehrig’s disease, Multiple Sclerosis, as well as trauma, Kerr said. The study was released online in the journal Annals of Neurology.

Stem cells taken from the brains of adult mice repaired damage to spinal cord injuries in —- you guessed it —- rats, according to a study released this March in the Journal of Neuroscience. The cells produced Myelin, a protective material that insulates nerve fibers. The study was done at the Toronto Western Research Institute and the University of Toronto.

But to date, none of this stem cell research, whether adult or embryonic, has yet entered clinical trials in humans.