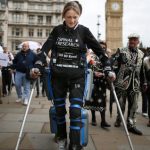 She may be paralyzed from the chest down, but a U.K. woman wearing a “robotic” suit has completed the London Marathon 16 days later.

A smiling Claire Lomas, 32, crossed the finish line Tuesday, earning her the title of the first person to complete a 42 kilometre course with the help of a ReWalk suit. The marathon began April 22.

“There were times when I questioned whether I would make it when I was training,” she told the Guardian after the race, which she walked at a pace of about 3.2 kilometres per day with her husband and 13-month-old daughter, Maisie.

“Once I started, I just took each day as it came and every step got me a step closer.”

The $69,000 bionic device, comprised of leg and body braces and crutches, uses motion sensors and a computer system to let paralyzed people walk by shifting their balance.

Lomas lost mobility after injuring her spinal cord in a “freak accident” at a horse-riding competition in 2007.

She credits support from friends and family for her progress since then, but notes on her blog that not everyone is as lucky after catastrophic injuries. She entered the marathon to raise money for spinal cord injury research.

So far, she has raised more than $152,000 for Spinal Research, a British charity aiming to develop treatment for paralysis caused by broken backs or necks.

Lomas’ remarkable accomplishment also won her the Virgin Trophy for “superhuman feats of endurance,” presented to her Tuesday by Richard Branson’s daughter, Holly.

The award came after some controversy that Lomas would not get a finisher medal or a spot on the results list of the Virgin-sponsored marathon. To get a medal, the 35,000 participants needed to finish within eight hours and 15 minutes of the start time, marathon spokeswoman Nicola Okey confirmed.

“After the final cut off time we do not have water stations or medical cover on the course, the timing system has been dismantled, and we have no way of confirming that a runner has in fact completed the full marathon course,” Okey wrote in an email, adding they had discussed the policy with the charity before accepting Lomas’ entry.

But a dozen other marathoners donated their medals to Lomas, according to the Guardian, to celebrate her achievement.