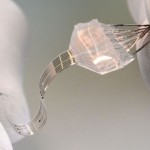 A thin and flexible implant that can be applied directly to the surface of the spinal cord to administer electrical and chemical stimulation has been developed by scientists in Switzerland. The e-Dura implant, made from a silicon substrate embedded with electrodes, replicates the properties of the soft living tissue around the spinal cord; meaning it can remain in situ without discomfort.

In 2012 the researchers showed how electrical-chemical stimulation could restore lower body movement in rats with spinal cord injuries. They showed that a severed section of the spinal cord can regain its use when a rat’s innate intelligence and regenerative capacity is awakened with a treatment of chemicals. The scientists then stimulated the spinal cord with electrodes implanted in the outermost layer of the spinal canal, called the epidural space. They found that a stimulated rat spinal column, physically isolated from the brain, started taking over the task of modulating leg movement, allowing previously paralyzed rats to walk, albeit involuntarily.

“By combining this electro-chemical stimulation of the spinal cord tissue we then tested whether we could then restore locomotion in the hind limbs. And this is what we found. Indeed we can – using this technology – we were able over weeks of time to stimulate the spinal cord in spinal cord-injured animals and allow then to walk,” explained Professor Stéphanie Lacour, co-author of the study at the Swiss Federal Institute of Technology in Lausanne.

However, applying these so-called ‘surface implants’ to humans presented a host of problems. By applying them directly to the spinal cord, any movement or stretching of the nerve tissues would cause the implant to rub, with repeated friction leading to inflammation, build-up of scar tissue and, ultimately, rejection of the implant.

Lacour, who is leading the research alongside study co-author Grégoire Courtine, said they needed to come up with a more viable material.

“To define whether or not the softness of the mechanical compliance of the device mattered in terms of its long-term integration with the tissue. Because one important aspect of our studies is that we design the implant so that it could, one day, be used in a therapeutical context. So we wanted an implant that could stay for quite some time in vivo without inducing any detrimental effect. And so the first question we asked was: is soft making a difference?” she said.

The soft and stretchy prototype device was designed and built on site. The silicon substrate is covered with gold electric conducting tracks, with the electrodes made from a composite of silicon and platinum microbeads. A tiny microchannel enables the delivery of drugs — in this case, neurotransmitters that reanimate the nerve cells beneath the injured tissue.

“We implanted the device subdurally; so just below the natural skin that protects the spinal cord, so that we could be at the very surface of the spinal cord. And then we used this to stimulate electrically, and also chemically. And we added to the implant a very small conduit, like a micro channel where we could deliver also drugs,” said Lacour.

Implanted beneath the dura mater, directly onto the spinal cord, the elastic e-Dura prototype can be bent and deformed almost exactly like the living tissue that surrounds it. When the prototype was implanted into rats it caused neither damage nor rejection, even after two months.

Lacour added that one of e-Dura’s unique properties is the embedded metallic electrodes that can be bent and stretched without breaking: “The innovation in e-Dura is that the metallic track can also withstand a very large deformation. So we have stretchable metal integrated in e-Dura.”

While the team is confident the technology can be successfully implanted without rejection, the spinal cord of the paralyzed rat is currently stimulated from an external source, with no correlation between the its brain and spine. Lacour concedes this is the next hurdle to overcome: “There’s no link at the moment between the brain; so the motor command between the brain and the actual stimulation pattern on the spinal cord. So we now also have to find a way to link the two so that the person will think about moving and, indeed, the stimulation will be synchronized.”