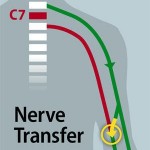 Surgeons at Washington University School of Medicine in St. Louis have restored some hand function in a quadriplegic patient with a spinal cord injury at the C7 vertebra, the lowest bone in the neck. Instead of operating on the spine itself, the surgeons rerouted working nerves in the upper arms. These nerves still “talk” to the brain because they attach to the spine above the injury.

Following the surgery, performed at Barnes-Jewish Hospital, and one year of intensive physical therapy, the patient regained some hand function, specifically the ability to bend the thumb and index finger. He can now feed himself bite-size pieces of food and write with assistance.

The case study, published online May 15 in the Journal of Neurosurgery, is, to the authors’ knowledge, the first reported case of restoring the ability to flex the thumb and index finger after a spinal cord injury.

“This procedure is unusual for treating quadriplegia because we do not attempt to go back into the spinal cord where the injury is,” says surgeon Ida K. Fox, MD, assistant professor of plastic and reconstructive surgery at Washington University, who treats patients at Barnes-Jewish Hospital. “Instead, we go out to where we know things work — in this case the elbow — so that we can borrow nerves there and reroute them to give hand function.”

Although patients with spinal cord injuries at the C6 and C7 vertebra have no hand function, they do have shoulder, elbow and some wrist function because the associated nerves attach to the spinal cord above the injury and connect to the brain. Since the surgeon must tap into these working nerves, the technique will not benefit patients who have lost all arm function due to higher injuries — in vertebrae C1 through C5.

The surgery was developed and performed by the study’s senior author Susan E. Mackinnon, MD, chief of the Division of Plastic and Reconstructive Surgery at Washington University School of Medicine. Specializing in injuries to peripheral nerves, she has pioneered similar surgeries to return function to injured arms and legs.

Mackinnon originally developed this procedure for patients with arm injuries specifically damaging the nerves that provide the ability to flex the thumb and index finger. This is the first time she has applied this peripheral nerve technique to return limb function after a spinal cord injury.

Mackinnon cautions that the hand function restored to the patient was not instantaneous and required intensive physical therapy. It takes time to retrain the brain to understand that nerves that used to bend the elbow now provide pinch, she says.

Though this study reports only one case, Mackinnon and her colleagues do not anticipate a limited window of time during which a patient with a similar spinal cord injury must be treated with this nerve transfer technique. This patient underwent the surgery almost two years after his injury. As long as the nerve remains connected to the support and nourishment of the spinal cord, even though it no longer “talks” to the brain, the nerve and its associated muscle remain healthy, even years after the injury.

“The spinal cord is the control center for the nerves, which run like spaghetti all the way out to the tips of the fingers and the tips of the toes,” says Mackinnon, the Sydney M. Shoenberg Jr. and Robert H. Shoenberg Professor and director of the School of Medicine’s Center for Nerve Injury and Paralysis. “Even nerves below the injury remain healthy because they are still connected to the spinal cord. The problem is that these nerves no longer ‘talk’ to the brain because the spinal cord injury blocks the signals.”

In this case, Mackinnon took a non-working nerve that controls the ability to pinch and plugged it into a working nerve that drives one of two muscles that flex the elbow. After the surgery, the bicep still flexes the elbow, but a second muscle, called the brachialis, that used to also provide elbow flexion, now bends the thumb and index finger.

“This is not a particularly expensive or overly complex surgery,” Mackinnon says. “It’s not a hand or a face transplant, for example. It’s something we would like other surgeons around the country to do.”