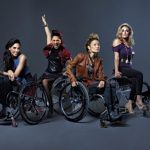 LOS ANGELES (AP) — In the opening moments of a new reality show, a pretty blonde pulls up to a gas station in her sporty Mustang. As she fills the tank, she catches the eye of a man across the station and smiles. Soon she drives away, waving to her admirer as she leaves.

Another Kardashian-style series? Not quite. Around her fueling and flirting, we also see the woman assembling a wheelchair, popping herself into it and then disassembling the chair before driving off.

The blonde is 28-year-old Tiphany Adams, one of the stars of “Push Girls,” a Sundance Channel reality series premiering Monday that takes viewers into the lives of four beautiful wheelchair-bound women.

All paralyzed through injury or illness, Adams and her three best friends — Mia Schaikewitz, 33, Auti Angel, 42, and Angela Rockwood, 36 — are shown navigating everyday challenges of all sizes, from putting on makeup to starting a family.

It’s an unprecedented look at the lives of disabled women, catheters and all, and either a new high or new low for reality TV.

“As a community, we say we want to be treated like everyone else. Well, everyone else has a reality show,” said Paul Tobin, president and chief executive of United Spinal Association, an advocacy organization for people with spinal cord injuries. “These aren’t the ‘Mob Wives.’ … My belief is that ‘Push Girls’ will help dispel preconceived notions by showing people living their lives and enjoying the same things as everyone else, just a little bit differently.”

“It truly is reality and it’s bringing home what it’s like to live with a spinal cord injury,” he said. “With these women’s sense of style, sense of humor, and sense of who they are and what they’re going through, the portrait is really important because I think most people don’t really think about what life is like in a chair.”

“Push Girls” star Angel never did. A professional hip-hop dancer who toured with artists such as N.W.A. and LL Cool J, Angel’s spinal cord was snapped in a 1992 car accident. She was paralyzed from the waist down and has used a wheelchair ever since.

“Before my car accident, when I was an able-bodied person, I never met a person with a disability,” she said. “So I would be in the same boat with the viewers, like wow, they can have kids? And they don’t marry other people in wheelchairs?”

Angel allows the cameras to eavesdrop on her private conversations with her husband about having a baby, one of the show’s ongoing story lines.

Producer Gay Rosenthal said she was inspired to make “Push Girls” after meeting Rockwood, a model and actress who became a quadriplegic after a 2001 car accident.

“I was really taken with her,” the producer said. Then she met Rockwood’s best friends and “it changed my life.”

“This is why I do what I do,” she said. “They’re more able bodied than some able-bodied people. They’re so inspirational.”

And their message is universal: “You watch just their spirit and how nothing stops them and how they live life, and it makes you think, ‘I can get through my challenge, my obstacle and my adversity,” said Rosenthal, also the executive producer of TLC’s “Little People, Big World,” a reality series about the everyday life of a family of little people.

Rosenthal maintains that the show doesn’t exploit its subjects.

“Here’s the thing: People are interested in how (“Little People” stars) Matt and Amy do things differently,” she said. “Just like Tiphany pumping gas, it’s really interesting to see and it’s no big deal for her.”

Schaikewitz said her paralysis at age 15 from a ruptured vessel in her spinal cord is “the best thing that ever happened to me, for reasons that I am able to open somebody’s mind by doing an everyday normal activity.

“I don’t even have to converse with somebody,” she said. “They see me pumping gas and that changes their day. To me, that is a huge gift.”

So is having the Sundance Channel and “Push Girls” to share her reality with others.

“When I was first paralyzed, I always had this mission to open people’s minds and get us a little more accessible to people who don’t know our world because it would erase some fears, and I always thought the best way to do that would be through mass media,” she said. “This is totally not exploitative. It’s educational, but in a fun way; not like a public service announcement and not like preaching.”

The 14-episode series will follow the women as they work, swim, ski, date and relate with their families.

“This was a story that hadn’t been told about four women in wheelchairs, and it really lifted the lid on a population that hasn’t really been looked at on television,” she said. “The show really does challenge some stereotypes (for those who) are really hungry and open to an authentic, honest discovery about something we haven’t thought about before.”

For Tiphany Adams, the woman at the gas station, the series tells the world she still has what it takes.

“It’s about awareness. It’s about showing you that we are courageous and we still have power and that enthusiasm for life,” she said. “We still love shopping. We still love flirting our wheels off.”