The scurry for a spinal injuries cure 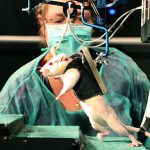 IT WAS one small step for a rat, but it may be one giant leap for mankind.

Rats paralysed by spinal injuries have learned to walk, and run, again after groundbreaking treatment which “awakens the spinal brain” and helps the spine to repair itself.

Australian experts yesterday hailed the successful research as bringing science to “the edge of a truly profound advance in modern medicine” by allowing paralysed people to walk again.

Swiss scientists who have spent five years investigating how the brain and spine can adapt to injury, injected a chemical solution into the rats which stimulated neurons in their spines.

The cocktail of drugs, aided by electrical stimulation, strengthened the signals normally sent by the brain down the spinal cord in healthy rats, and when the tests rats, which had severely damaged, but not completely severed, spinal cords, were placed in special harnesses, they could walk.

“After a couple of weeks of neurorehabilitation with a combination of a robotic harness and electrical-chemical stimulation, our rats are not only voluntarily initiating a walking gait, but they are soon sprinting, climbing up stairs and avoiding obstacles,” Gregoire Courtine from the Ecole Polytechnique Federale de Lausann said.

“This is the world-cup of neurorehabilitation – our rats have become athletes when just weeks before they were completely paralysed. I am talking about 100 per cent recuperation of voluntary movement.”

The breakthrough also relied on Dr Courtine’s previous research, which he called investigating the “spinal brain” and which had shown a rat’s spinal column could take over modulating leg movement even when separated from the rat’s brain.

This revealed that only a very weak signal from the brain was needed for the animals to initiate movement of their own volition, and the new combination of chemical injections and electric stimulation also worked.

Placing the rats in harnesses allowed “willpower-based training” which saw the rats want to walk, or run, towards a food reward.

Dr Courtine is optimistic that human trials will begin in a year or two at Balgrist University Hospital Spinal Cord Injury Centre in Zurich, Switzerland.

“There will be hurdles before we see this translated to real effect in people, but the study by Gregoire Courtine and his team suggests we are on the edge of a truly profound advance in modern medicine: the prospect of repairing the spinal cord after injury,” Dr Bryce Vissel, Head of the Neurodegenerative Diseases Research Laboratory at the Garvan Institute of Medical Research in Sydney, said yesterday.

“The major advance of this new study is to show that it is possible to stimulate almost complete functional recovery in rats with profound injury, using a combination of therapeutic drugs injected into the spinal cord, electrical stimulation of the spinal cord and initial assistance to walk.

“Courtine’s study shows that with these treatments, the spinal cord is able to self-repair and to allow voluntary movement.

“This is an exceptional study with potential implications for people.”

Duncan Wallace, Executive Director of SpinalCure Australia, said: “This study strengthens our belief that finding a cure for this devastating condition is now only a matter of time and sufficient funding. We are heading towards a time where a spinal cord injury is no longer a life sentence.”

Malcolm Holland
From: The Courier-Mail