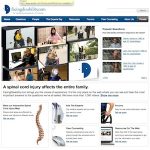 They are the faces and voices of survivors, answering important and sometimes personal questions about their life’s adjustments in short video segments.

There’s Steve, who became a paraplegic at age 23 in 2006, talking about the suicidal thoughts he had after he suffered a spinal cord injury. There’s Tony, who became a quadriplegic at age 27 in 1990, going into detail about his long rehabilitation process and sex after his injury.

And then there’s Carol Ann, whose son became a quadriplegic at age 20 in 1993, discussing the difficult first days after the injury, when she thought she’d lose her child. And there’s Lisa Rosen, a program manager for the Rehabilitation Institute of Chicago, providing information about adjusting to life in a wheelchair.

These are among the more than 100 people featured in on-camera interviews for FacingDisability.com, a multimedia-rich website launched in 2011 by nine-time Emmy Award-winning Chicago broadcast producer Thea Flaum. 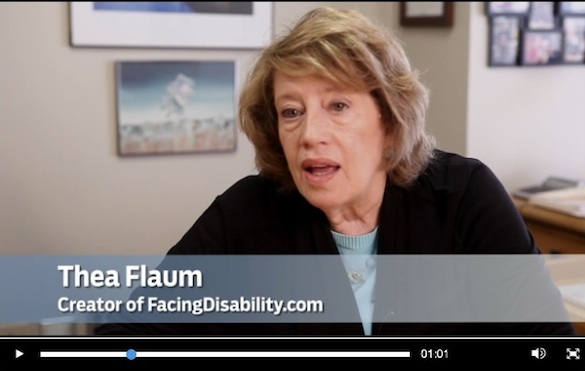 What makes FacingDisability.com so unique is the breadth of information it provides to an online viewer. Flaum and her assistants created a list of 48 questions and then conducted on-camera interviews, not just with people who suffered spinal cord injuries, but also their mothers, fathers, siblings, spouses, children and experts in the field.

The questions ranged from the personal (“What was your greatest fear?”; “What was the hardest part of rehab?”; “Are you happy?”) to the technical (“What are pressure sores?”; “What kind of surgery is common after a spinal cord injury?”). Flaum’s group edited the responses into more than 1,000 individual videos on the site, which has answers to just about every question imaginable about dealing with paralyzing injury.

“We tried to keep the answers short and specific,” Flaum said. “Of the more than 1,000 or so answers on the site, there probably aren’t 25 that are more than a minute long.”

Flaum, 73, has been a major force in local and national television over the last 35 years. She was the executive producer for PBS’ “Soundstage”; created the first national parenting series, “Look At Me” with Phil Donahue; and had an independent Chicago-based production company. But she is best-known as the creator and producer of “Sneak Previews” with Chicago Sun-Times movie critic Roger Ebert and the late Tribune critic Gene Siskel, which premiered (as “Opening Soon … At a Theater Near You”) on WTTW-TV in 1975 and began airing nationally on PBS in 1977.

FacingDisability.com is perhaps Flaum’s most personal creation, because it’s rooted in a personal tragedy in her family — in 1986, her stepdaughter, Vicki Hill, fractured her spinal column after diving into a swimming pool in Naperville.

“When I got the call that she had been injured, I couldn’t believe it,” said Robert Hill, Flaum’s husband. “There was my 22-year-old daughter on a hospital slab. When I saw the X-rays that night, I knew things weren’t going to be the same.”

Vicki’s story ended happily — despite being a quadriplegic, she ended up marrying, moving to Connecticut (where she works as a vocational rehabilitation director) and having a child, who is now 16. But Flaum and Hill never forgot the frustrations of being family members of a spinal cord injury survivor.

“It is an isolating experience,” Flaum said. “Most people don’t know anyone else who has had a spinal cord injury.”

So when Flaum sold her production company in 2007 to former employee Dan Lombardi, she and her husband launched the not-for-profit Hill Foundation with the goal of creating a comprehensive, multimedia website for spinal cord survivors and their families.

The response from medical institutions throughout the world has been overwhelming.

“I think it’s a fresh new breath in the disability community for disseminating important information because of its approach,” said Bernadette Mauro, the director of information and resource services at the Christopher and Dana Reeve Foundation (and a spinal cord injury survivor). “In addition to providing great information, the videos give people the face behind the injury. You realize after watching these videos that life goes on.”

“It’s about as comprehensive of a site that we’ve seen,” added Dr. Lee Ritterband, the head of the department of psychiatry and neurobehavioral sciences at the University of Virginia, which has utilized more than 50 FacingDisability.com videos for its own website.

The Rehabilitation Institute of Chicago, which provided many of the interview subjects for FacingDisability.com, was so impressed that they started working with Flaum on a similar website devoted to families of those who have suffered traumatic brain injuries.

“Thea first talked to me about FacingDisability.com several years ago over lunch — I thought it was a great idea,” said Dr. Joanne Smith, CEO and president of the Rehabilitation Institute. “But the execution was even better than expected. She’s focused on one condition, which is smart. And she’s put it in an easy format, which is easy to access and very rich with color and emotion.”

Flaum’s longtime collaborators outside the medical field, such as Ebert, echo the praise for FacingDisability.com. Ebert, who has survived his own debilitating health issues caused by thyroid and salivary cancer, is a visitor to the site.

“It is particularly useful because it deals not in theory or abstract advice, but in personal experiences,” Ebert wrote in an email. “People in this situation can learn valuable insights by sharing with each other.”

“Thea continues to amaze me with how she reinvents her goals,” he added.

The Hill Foundation did not apply for any grants to complete the project, which Flaum said cost more than $400,000. Former broadcast colleagues worked on reduced fees to help Flaum.

Despite her extensive television background, Flaum always thought of this as a uniquely online experience. “We needed to make this accessible, and the beauty of the Internet is that it’s always there,” Flaum said.

Interview subjects (with the exception of the medical experts) are only identified on-screen by their first names, ages and year when they suffered their debilitating injuries. There aren’t any well-known interview subjects, with the possible exception of Chicago police officer Jim Mullen, who became a quadriplegic after being shot while responding to a police call in 1996.

“You don’t find out how they were injured,” Flaum said about the videos on the site. “And we steered away from the spiritual, religiously focused, climb-the-mountain advice. The questions were focused on what did you learn, what works for you, what do you know that will be helpful to other people.”

The interview subjects, who were videotaped in 2009 and 2010, were pleased with the results.

“I knew they would do a good job, but I was shocked at how beautiful it was,” said Tony Hinton, a 50-year-old Des Plaines resident who was paralyzed after being struck by a hit-and-run driver while valet parking in 1990.

“The interview session was great because Thea was so sensitive to the issues and interested in what I was saying,” added Carol Ann DePauw, a San Diego resident whose son, Darren, was injured in a rollover car accident. “It’s great because it offers a connection for people who are newly injured, who don’t know where to turn.”

FacingDisability.com also offers links to other related resources on the Web, forums where visitors to the site can participate in discussions on issues involving spinal injuries and a peer counseling service that connects survivors and their families through private emails on the site.

Although there is no launch date set, Flaum is now in the initial stages of working with the Rehabilitation Institute of Chicago on the traumatic brain injury site, which she says will be more challenging. There are approximately 5,000 spinal cord injuries in the U.S. each year, while there are more than 250,000 traumatic brain injuries, according to the Rehabilitation Institute.

“But it’s good that we did FacingDisability.com before doing this,” she added. “It’s given us a road map.”