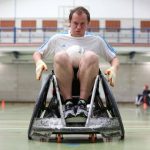 Crash! The sound of metal hitting metal reverberates around the Royal National Orthopaedic Hospital. Most people only ever visit here if they are unfortunate enough to have suffered a spinal injury. I can hardly complain. I am merely being beaten up by a man with one leg and no mercy.

People tend to do a double-take when they first encounter the phrase “wheelchair rugby”. That is the sport’s sanitised name – until a makeover it was called “murderball”.

Think wheelchair basketball, but without the baskets. The four players on each side must merely propel the ball from one end of the court to the other, but with one crucial difference: attempted murder.

“You use the chair to smash the living daylights out of the opposition,” explains Ross Morrison, 32, a two-time TeamGB Paralympian, shortly after I have foolishly changed into my kit. Today, he and I are training with the London Lions at the sports centre attached to the Orthopaedic Hospital in Stanmore, north London. Many of the TeamGB squad are here.

“You can’t spin someone’s back wheel on purpose,” he goes on. “That’s dangerous. Apart from that, it’s open season. Knocking someone out of their chair is actively encouraged.”

Channel 4, the broadcaster of the Paralympics, hopes that wheelchair rugby will be one of the jewels in the crown of its coverage. All the sessions in the 10,000-seat Olympic Basketball Arena sold out long ago, but access can still be gained with a ground pass. “When people watch it, they are always, like, ‘wow’,” Morrison enthuses. “At its best it’s a stunning game to watch.”

It most certainly is. Ball on lap, twisting one wheel forward, the other back, the players jink and weave around each other with all the dexterity of a scrum-half breaking down the blind side. When they don’t make it through, they crash into one another with the fury of an NFL linebacker, except the contact is not pad on pad but metal on metal. The chairs are made from aircraft-grade aluminium and cost at least £5,000 each.

The sport’s complexities are hidden in its classification system. Wheelchair rugby players have limited functionality in at least three limbs, and in most cases all four. It was invented in Canada in the 1970 as a sport for quadriplegics – people with limited use of all four limbs as a result of a spinal injury. Now people with congenital conditions play as well.

Depending on how much use a player has of their arms and upper body, they are awarded a score from 0.5 (least mobility) to 3.5. Teams are 12-strong, with only four on court at any one time. Whichever four are on court must not have a combined score higher than eight. Women have 0.5 subtracted from their classification.

“Low pointers, they have limited use of their hands and arms,” Morrison explains. “They tend to be defensive players – setting screens, blocking and trapping.” They are easy to spot, in the main: they are the ones with bull bars protruding from the front of their chairs. They take no prisoners.

Morrison broke his neck during a school rugby match. He is still able to write, and is a 2.5. Among his team mates is Steve Brown, 31, the TeamGB captain. Like the rest of TeamGB, they are professional athletes, receiving funding from UK Sport and the National Lottery. “I don’t train six days a week to get a pat on the back,” Morrison says. “I train to win.”

Brown began playing wheelchair rugby after he injured his spinal cord in an accident seven years ago. More recently, during a match, he fell forward out of his chair and broke his sternum and four ribs on an opposing player’s knees. “I was in hospital for six weeks,” he says, laughing.

Armed with this information, I am strapped into my chair and subbed in. I have a pretty badly injured knee from rugby a few years ago, and struggle to squeeze my right leg into the chair, a misfortune I choose to keep to myself. “When you’ve got the ball, make sure you lean forward to protect it,” Brown instructs.

Fortunately this comes just after his teammate has told me the tale of the Blue Peter presenter who came to train with them a couple of years ago. “We told him to lean forward to protect the ball. When you lean forward, all your weight’s at the front of the chair; you’re not stable. I smacked into him from behind and he went flying. Supermanning across the court! Superb! Never made it on to the telly for some reason.”

I receive the ball, turn with all the dexterity of the QE2, and immediately Smack! Smack! Smack! Luke White, 23, born with Amniotic Band Syndrome and the hooded eyes of a killer, is upon me. I lose the ball and it runs off the court.

“Your rhomboids will hurt in the morning,” Morrison tells me. I admit I don’t know where my rhomboids are. “You will,” he says. The next day, indeed I do: they are the shoulder muscles one engages to propel a wheelchair.

“I was told to get you,” White admits later. “But I couldn’t quite knock you out of your seat. Your legs are fat, so it’s much harder. People with skinny legs or no legs, they’re easy.”

White is in the TeamGB development squad, having taken up the sport last year, and won’t play in London. But by all accounts he is a force to be reckoned with for the future. By the time he plays in Rio 2016, as it seems he might, his contemporaries hope wheelchair rugby will be on the British map, but that will be contingent on medal success. Australia and the USA are the teams to beat.

“We came fourth in Athens, fourth in Beijing,” says Morrison. “It was popular then, but this time it’s local, it’s on telly at the right time, and we’re training bloody hard. We’ll win a medal.”

Paralympics could be first to sell out

When Paralympic tickets were put on sale again on 21 May, more than 125,000 were sold in a week. Organisers hope the London Paralympics may yet be the first Paralympics to sell out in the event’s 52-year history.

Athletics tickets have sold the most, but there are still plenty available.

More than 1.2 million of the 2.2 million tickets have been sold.

“We’re probably in the strongest position we’ve ever been in for ticket sales ahead of a Paralympics,” said Craig Spence, the head of communications for the Bonn-based International Paralympic Committee. “It would be great if we could sell out the Games. It’s definitely possible.”