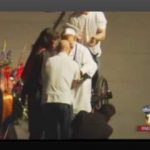 SAN DIEGO — A Scripps High School senior who was left paralyzed for 17 years walked at his graduation ceremony on Tuesday.

For the last three years, Patrick Ivison has undergone six hours per day of intense physical therapy in hopes that he would walk to his diploma on the day of his high school graduation.

“There’s always that like, oh, I’ve got you know, all of America expecting me to get through this,” he said.

Nearly 17 years ago, when Ivison was just 14 months old, he suffered a severe spinal cord injury that left him paralyzed after a driver backed over him with his car.

“It happened in an instant. The car backed up suddenly and it clipped him, knocked him down,” recalled Jennifer Kayler, Ivison’s mother.

Ivison was treated at Rady Children’s Hospital, and when Kayler got the news her son’s spinal cord was damaged, she had just one thought.

“I was just grateful. I was grateful he was with me, and I was grateful that I get to hear him laugh and the fact that he was going to be in a wheelchair didn’t matter,” said Kayler.

Being in a wheelchair has never stopped Ivison. At age 8, he decided he wanted to surf. By 13, he was adaptive surfing in the US Open of Surfing.

“It was honestly one of the best days of my life,” said Ivison.

That was until Tuesday night, when Ivison lived up to a big promise he made three years ago.

“It’s going to be a really cool moment,” he said.

And that it was. After his name was announced, Ivison – with the help of his trainer and custom walker – stood up and walked.

As he walked across the stage to his awaiting diploma, the crowd rose to their feet and encouraged him every step of the way.

Ivison’s service dog followed closely behind and received an award shortly after.

Now, Ivison says he has a new goal.

“Maybe do like jumping jacks at college graduation or something like that?” he said. “I don’t know… let’s not put that for sure because I can’t commit to that one.”

Ivison graduated with a 4.0 grade-point average and will attend the University of Southern California’s film school in the fall.