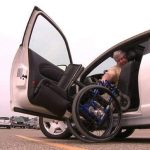 “They’re the ones handing out the placards, and I do feel it is being abused,” said Erica Coulston, president of Walk the Line to SCI (spinal cord injury) Recovery.

“There are no repercussions for physicians,” said Coulston, who uses a wheelchair. “They should be trusted to take these placards very seriously and assign them accordingly. It’s just gotten out of hand.”

“The doctors are signing off on people who really shouldn’t be getting them. That’s the issue,” Harris said. “The doctors need to be more responsible. … I think it’s a major problem.”

For some physicians, Harris said, “it’s a financial thing. They don’t want to lose the patient.”

Moiin is a dermatologist who gets permit requests about once a month — but doesn’t grant them.

“I’m a skin doctor,” he said. “No skin condition should need any handicapped permit.”

Speaking for himself and not the society, Moiin said the state should not allow physicians to write permits for themselves or people close to them.

“They should designate people who give these licenses. They shouldn’t leave it up to us to do it.”

He said that would actually relieve doctors who feel pressure when a patient asks for one.

“It’s like doing the patient a favor,” Moiin said. “Sometimes saying ‘no’ is not as easy as it seems.”

Read Part 2 of this series

‘Stem cells’ created in less than 30 minutes in ‘groundbreaking’ discovery