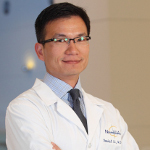 Daniel Lu, MD, and Reggie Edgerton, MD, recently received a five-year grant to explore new therapies for patients with spinal cord injuries from the National Institute of Biomedical Imaging and Bioengineering. Dr. Lu and Dr. Edgerton are researchers at the University of California, Los Angeles and clinicians at the UCLA Spine Center.

According to a report from the Centers for Disease Control, there are around 200,000 people living in the United States with spinal cord injury, and there are around 12,000 to 20,000 new patients annually. Nearly half — 46 percent — are the result of motor vehicle accidents while only 12 percent are from sports.
http://www.cdc.gov/traumaticbraininjury/scifacts.html

The first step is to explore therapeutic techniques in a rat animal model to see how they react to the cervical spinal cord injury treatment and then translate those findings into a pilot clinical study. Dr. Lu and his team are focused on two different treatments:

• Restoring function to paralyzed patients with electrical impulses to stimulate dormant pathways within the spinal cord. Dr. Lu is testing stimulation at various power levels, rates and locations to find the most effective dosage and application; each use is customized to individual patients and injuries.

• Using drugs — particularly off-label serotonergic agonists — to improve function. The drugs are designed to increase serotonin levels within the spinal cord, which the researchers hope will open communication pathways that cells ordinarily wouldn’t recognize and could restore some hand functionality and control.

“Our early data suggest that several novel neuromodulatory strategies that we have developed can be used to restore significant levels of motor functions,” says Dr. Lu.

Their strategy is derived from Dr. Lu and his collaborators’ findings in previous studies showing that even after the most severe injuries, there are often residual connections remaining within the spinal cord past the injury level and there is substantial automaticity encoded within the spinal cord that requires minimal input from the brain.

“Our strategy is to reinforce the dormant and residual connections and retrain the spinal cord to become functional again,” says Dr. Lu. “We are about five years away from utilizing these therapies. The NIH-funded study is to investigate what the most effective model of stimulating the spinal cord in order to apply it to the public. The technical hurdles include the location of electrodes, stimulation patterns, type of medication and dosing.”

Preliminary studies show that hand function — particularly hand grip forces — can be improved up to 300 percent with a combined approach, which leads to greater independence for patients. This could make a huge impact on patients, who are still young for the most part. Around 50 percent to 70 percent of new SCI cases occur in people who are 15 years old to 35 years old.

“For example, one subject is now able to use a cell phone to make calls and text; another is able to use his hands to open doors by turning a door knob; and others have become independent of their caregivers by having the ability to perform self-transfers and activities of daily living,” says Dr. Lu. “These have meaningful impact on the lives of those living with spinal cord injury.”

Spinal cord injury is costly on society due to caregiver responsibilities and loss of patient employment. According to the CDC report, the average annual medical cost for SCI is $15,000 to $30,000 per year; estimated lifetime cost is $500,000 to more to more than $3 million. As a result, any therapies that could restore function have huge economic benefits to decrease caregiver burden and improve independence and employment.

“Additionally, any therapies that would decrease immobility that contributes to comorbidities associated with SCI, such as pressure ulcers, DVT, pneumonia, are impactful,” says Dr. Lu. “Concomitantly, from a clinical and humanitarian perspective, improvement of any motor function restores independence to the patient and highly beneficial psychologically to the patient and restores hope.”

If wayne saves one, it’s worth it