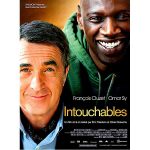 Maybe you’ve heard the buzz about The Weinstein Company’s The Intouchables, the French film that more than a third of that country has seen. Don’t miss it.

Based on a true story, this is a touchingly comedic and unapologetic movie about someone living with high-level paralysis. My many friends and colleagues who live with paralysis declare it honest and accurate. More importantly, this is a story of human connection. About discovering the commonality among all of us, no matter how distant that connection might initially seem.

We were so moved by the story that we have decided to honor the film, which is a first for us, at our gala later this year. The great Meryl Streep, always a champion for our cause, introduced Harvey Weinstein to our organization. The response we received from Harvey and the film’s directors Eric Toledano and Olivier Nakache when we told them we wanted to honor their work mirrored how our organization feels about the film — it was the purest form of joy. Harvey told us, “To hear that the Reeve Foundation is as touched by this true story of friendship as much as we are fills us with so much pride and makes us feel truly honored. We feel extremely lucky to be the ones who got to share this story with the world and are overwhelmed by the response we’ve received.”

In the United States alone, there are 5.6 million people living with some form of paralysis. Probably someone you know. 1.75 million of our friends and neighbors are living with paralysis due to a spinal cord injury.

The paralysis community is the most marginalized minority group in our country, with an annual cost of living of at least $140,000 attached to a high-level spinal cord injury — in other words, it costs $140,000 per year just to stay alive. This community also grapples with disturbingly high unemployment (59 percent) and poverty (60 percent) rates. Depression and isolation are, as you can imagine, big challenges. And this is just in the U.S., which is more forward-thinking and accessible than most other countries around the world.

I’m not going to give anything away, but when you see The Intouchables, you’ll watch an incredibly uplifting story — a comedy — about friendship, trust, and human possibility. Philippe, a Parisian millionaire living with high-level paralysis due to a spinal cord injury, is captivated by Driss, an unsophisticated, street-smart ex-con from Senegal who applies for a job as Philippe’s caretaker — with no qualifications. Rather than hiring someone more qualified for that complex position, Philippe hires Driss. And they’re a terrible match… that somehow works.

It works because Driss doesn’t pity Philippe. He sees him as a person instead of a patient. He is honest about his feelings as a caretaker, asks questions about life with paralysis and has expectations of Philippe. While Driss learns about fine art, Vivaldi, and responsibility from Philippe, Philippe is transformed by Driss, too. He rediscovers his sense of adventure, hope and wonder.

More than a buddy comedy, this film invites you to look deeper at Philippe’s abilities rather than remain constrained by his barriers. Together, they express a view of the world as full of possibility, rife with opportunities to move forward. This is the reality of life with a spinal cord injury. It’s difficult and beautiful; just like every other life.

This is a feel good movie. No doubt. Early in the movie is a scene that lays bare many of the stereotypes that burden people living with paralysis. Philippe is not a tragic waif. Driss is not an angelic hero. Each contains flashes of both tragedy and heroism within themselves.

See The Intouchables. Certainly, it’s eye-opening about the realities of life with paralysis. Our Foundation is working every day to help bring these realities at the forefront of our collective consciousness, to improve quality of life for people living with paralysis, and to advance groundbreaking research into the underpinnings of spinal cord injury and the development of therapies — and cures.

Beyond that, The Intouchables is a movie that reminds us of the connections we all have as humans, no matter how vast our differences may seem at first, no matter how we each propel ourselves through this life; that we all touch the lives around us.

You can borrow the book the movie was based on, You Changed My Life, from the Christopher and Dana Reeve Paralysis Resource Center.

Lessons we learn from review of urological procedures performed during three...