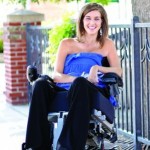 The trapdoor she fell through has proven to be an opening that changed her attitude and life “in the best ways possible,” she says.

“I’m amazed at how good my life is. I get to help people, share hope and inspire when sometimes this world seems so hopeless,” she told me in a recent interview. “Who I am today is completely opposite of who I was when I fell through that trapdoor. I guess I could have gotten here without the accident, but I’m not certain of that.”

I have interviewed Tasha several times and written numerous accounts about the impact her accident and that of classmate Sarina Murray had on the Ellsworth community. Murray was seriously injured in a car accident three days before Tasha’s accident. Both women have been courageous in their recovery battles.

“Life is certainly not perfect, which is why my faith is so important,” Tasha says. “Before the accident, I was very self-conscious, had low self-esteem and mediocre goals. I enjoyed life, but yet, deep down, I missed things.

“Now, with my faith, I feel like I’m a whole human being,” she adds. “God is in my life and he’s shown me the way and I’m sharing my story. I’m a confident woman and the sky’s the limit.”

Tasha shares her story via speaking engagements at schools, hospitals, correctional centers and other venues. Her book, “My Last Step Backwards,” is being edited.

She’s been told many times over the years to write a book, to inspire others. She’s been writing it the past two years with the help of Ellsworth High School English teacher Jan Pavloski.

“It’s taken longer than I wanted, but it will be done right and well,” she said.

That seems to be Tasha’s motto – do things as right and well as possible, regardless of the roller-coaster ride called life.

“I just have to do things with the power of a positive attitude,” she said, shortly after telling of a six-week hospital stay in which she missed 15 speaking engagements. “Being positive has made such a difference in my life.”

Tasha has lived about five years in a house outside Ellsworth. She loves spoiling her nieces, cares for her cats and does many chores by herself. She uses caregivers about four hours a day. She’s also dating Doug Michaels, a meteorologist from Eau Claire, whom she met online.

“My life is so good,” she says. “I never thought I’d be able to say that, but I honestly can.”

“I would never wish what I’ve been through on my worst enemy, and yet I am blessed by how well it has gone and all the doors that have opened for me,” she said.

“We have a choice every day when we wake up on how we are going to live,” she adds. “You can’t let things hold you back.”

Every person has a story, and Tasha’s certainly is unique – one that should be inspiring to all of us.