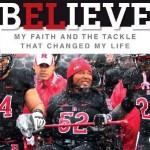 Nobody can say Eric LeGrand never asked, “Why me?” He did. Many times.

The former Rutgers football player, who was paralyzed after a tackle during an October 2010 game, asked himself why he had a line of people waiting to visit him while so many other patients had no one. Why he was still alive when the young girl who had been in the hospital room next to him was not. Why he was lucky enough to have multiple insurance policies and a foundation to cover the expensive rehabilitation and a customized van he’d need, while other families go bankrupt, their injured son or daughter unable to get the resources they need to recover after a tragic accident.

Then he asked himself what he could do to help others.

Approaching the two-year anniversary of his injury, LeGrand – who will sign his book about that journey, “Believe,” in Ridgewood on Thursday – continues intense physical rehabilitation, while working to positively impact people around him, whether they’re young, old, disabled or just perspective-deprived.

Of course, the transformation from injured football player to spinal cord injury advocate didn’t happen immediately. When LeGrand arrived at Kessler Institute for Rehabilitation in West Orange, clinical manager and therapist Sean McCarthy saw a kid struggling with physical and emotional adjustments. LeGrand evolved into who he is now thanks to tremendous support – particularly from his mother and family – and his down-to-earth personality.

“Even though he got a ton of attention, he was always very humble,” says McCarthy. “He wasn’t one of those people who treated himself like he was entitled to anything.”

At Kessler, LeGrand invited other patients to his room for meals, movies and discussions about their mutual struggles. Then, when he could, he started speaking at schools, organizations and for others who had suffered similar injuries. His book tells how he went from scared patient to advocate and motivational speaker.

“Believe” also details his life leading up to the injury, that day and the difficult ones that followed, as well as his successes since and the details of a paralyzed person’s daily life.

“I wanted to tell my story and get it out there to the world, and hopefully it’ll be used as a source of inspiration,” LeGrand says.

For LeGrand, it is a way to pay it forward and to show appreciation to those who inspired him throughout his continuing recovery. They include Adam Taliaferro of Voorhees, who was injured while playing football for Penn State in 2000. After spinal fusion surgery, multiple doctors told his parents he would be paralyzed for life. Three months after the injury, however, he walked out of a rehabilitation hospital in Philadelphia.

Taliaferro visited LeGrand after LeGrand’s injury and was impressed immediately.

“For me, personally, it took a couple of weeks to stop feeling sorry for myself,” says Taliaferro. “It’s really not easy for anyone who goes through these injuries. You ask yourself, ‘Why me? Why me?’ People get over that at different rates. The first time I met Eric, I could see he didn’t have that feeling-sorry-for-himself trait.”

Soon after his injury, Taliaferro received a call from Christopher Reeve, the actor who was paralyzed in a horse riding accident. Having received that support, Taliaferro sees it as his obligation to offer it to others in similar situations.

“It’s kind of like a brotherhood, because it’s hard to explain what you’re feeling and how you’re feeling to someone who hasn’t been through the injury before,” Taliaferro says.

Reeve and many members of the “brotherhood” understood Taliaferro, who supported LeGrand – and now LeGrand too is helping others.

On days LeGrand doesn’t feel up to an event, he reminds himself that it is all bigger than him, that his appearance could make a positive impact on someone else’s life.

LeGrand believes he will one day walk again, finding inspiration in his accomplishments since the injury – he has worked as a radio broadcaster, was voted onto the cover of Sports Illustrated, won the Jimmy V Perseverance Award at the ESPYs and more. You don’t have to walk to take big steps.

“I always tell people, ‘Walking is not the measure for success,’ ” says Taliaferro. “The ability to move on with your life and continue to live your life, that’s the mark of success. Eric has already done that, if you look at the amazing things Eric has done. He’s already overcome.”

Amazon.com: Believe: My Faith and the Tackle That Changed My Life

Senators Home for Spring Recess – Stem Cell Vote in the...