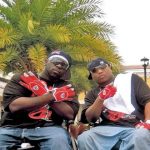 Welcome to reality. You are a teenager in the Bronx, and you have been shot by a gun. You have a spinal cord injury and a new identity: paraplegic. Life as you know it is changed in ways you never imagined.

This was the reality of rap artists Namel “Tapwaterz” Norris and Ricardo “Rickfire” Velasquez, ages 17 and 19, respectively, at the time of their life-changing accidents.

Mr. Norris, now 27, was at his sister’s birthday party when his cousin began playing with a gun. A bullet struck him in the neck.

Mr. Velasquez, now 32, was walking home from a party when saw a commotion ahead of him and heard someone shout about a gun. In an instant, he was on the ground, bleeding.

Although they didn’t know each other at the time, they shared a journey. They would spend their young adulthood dealing with changes to their bodies, their relationships and their understanding of themselves. They would face the challenge of crafting productive lives. And they would discover that their common passion for rap and hip hop was the key to a meaningful future.

When they finally did meet, they realized that they could use the genre to portray their reality and to inspire people with spinal cord injuries and other disabilities to believe in themselves. They also shared the hope that they could influence at-risk youth to steer clear of gun violence.

“Rap saved us,” the two men have said of their journey. “It helped us regain our lives.”

In 2006, they launched 4 Wheel City (www.4wheelcity.com) to showcase their message of survival. On Sept. 27, their “Welcome to Reality” tour comes to the August Wilson Center for African American Culture. The free program is sponsored by Pitt’s Office of Health Sciences Diversity and School of Health and Rehabilitation Sciences.

The population of Americans with spinal cord injury is overwhelmingly young and male, said Katherine Seelman, associate dean of Pitt’s School of Health and Rehabilitation Sciences. Recent statistics indicate that 80 percent of individuals with the condition are men, and 56 percent acquired their injuries between the ages of 16 and 30.

Young African-American men are disproportionately more likely than their white counterparts to acquire spinal cord injury from a gunshot wound, she added. “In spinal cord centers in cities such as Detroit and Los Angeles, gunshot wounds are the No. 1 cause of SCI.”

Such statistics and the stories behind them highlight the need that Mr. Norris and Mr. Velasquez set out to address. They saw that few people were reaching out specifically to African-Americans and Latinos with SCI. Hip hop music and culture could, they believed, be a powerful tool “to show the world that people with disabilities have talents and dreams and deserve to be treated equally.”

In early September, they performed at the 2012 Summer Paralympics, which immediately followed the Olympics games in London. “It was breathtaking,” said Mr. Norris. “Performing in the Olympic Park, traveling internationally, taking in culture. It was a real out-of-body experience.”

London was the latest in a string of high points that include performing at Philadelphia’s National Constitution Center for the city’s annual celebration of the Americans with Disabilities Act and coverage on CNN and ABC News.

But the coup that may prove to be pivotal is their recent “Welcome to Reality” G-mix with Snoop Dogg. Through word of mouth, they scored an invitation to meet the renowned rapper and arrived with hopes of remixing their signature song, which urges youth to stay in school and off the streets.

“We didn’t know how it would go, but we told him our idea and he went for it,” said Mr. Norris. Not only did Snoop remix the group’s anthem, but also he added a verse.

“Snoop supports the message, he’s rapped about it in the past, but I think we accomplished something [different] by doing this,” said Mr. Norris. “We brought him into our world.”

“Hip hop is empowering,” affirmed Lester Bennett, 37, of East Liberty, a Pitt graduate who served on the planning committee to bring 4 Wheel City to Pittsburgh. Mr. Bennett sustained a spinal cord injury at age 19 during an attempted robbery at the South Hills Junction T station.

“The show will be a great opportunity to address the stereotype of what a person with a spinal cord injury can or cannot do,” he said.

As an advocate with Three Rivers Center for Independent Living and African-American, Mr. Bennett has a particular interest in how minorities adjust to SCI and ensuring that people are connected with resources. The 4 Wheel City event will feature a resource fair.

“Minorities do not take advantage of [SCI] resources to the same extent as the majority,” Mr. Bennett said. One of the reasons, he believes, is the struggle to come to terms with disability. “People with spinal cord injuries fight the perceptions of others, but we also fight our self-perceptions. You face discrimination within yourself.”

Mr. Bennett says he hopes that the positive message of 4 Wheel City will open people’s minds to possibility. “I hope that people will come away saying, 10 minutes before I came here, I looked at myself as a person who couldn’t do things. Now I feel that I can do a lot.”